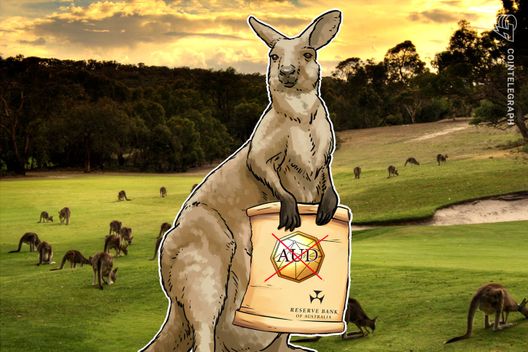 The Reserve Bank of Australia assistant governor Michelle Bullock said that the bank has not yet been convinced of the need to create a digital Australian dollar.

The Reserve Bank of Australia (RBA) assistant governor Michelle Bullock said that the bank has not been convinced of the need to create a digital Australian dollar, local business and finance news outlet The Australian Financial Review reported Oct. 24.

Speaking at the Sibos 2018 banking and financial conference in Sydney, Bullock reportedly said that she is “interested to consider what frictions these technologies are designed to address [but] in many cases I just don't see what the point is."

Among “touted” benefits digital currency could provide to central banks, Bullock cited the possibility to technically leapfrog the monetary policy problem of the “lower bound,” by allowing a central bank to support negative interest rates. Although, it is still "an untested and quite a different idea", she added.

Bullock said that before the bank could reasonably adopt a new asset like a digital currency, there would need to be a proven use case fore it. She added that proponents for a digital dollar should first demonstrate why current payment systems “can’t deliver” the same benefits of a distributed ledger. She stated:

“I’m not convinced that it has a use.”

Regarding the efficiency gain associated with the issuance of national currencies onto a distributed ledger, Bullock said that it is “not material” with respect to the other costs in the system. The assistant governor stated that digital currency “certainly would be a simplification,” although:

"It isn't a requirement in the sense the inefficiencies we are seeking to resolve here do not reside in that last final exchange of cash in an existing digitized cash system with corresponding securities — that is actually a highly efficient and high-speed exchange."

In June, the central bank of Australia denied it would issue its own cryptocurrencies, calling Bitcoin (BTC) “fascinating” but “inefficient.” Tony Richards, head of the RBA’s payments policy, stated that issuing the bank’s own token is “not a high priority for us, but it's something we're continuing to work on.”

Also in June, Board director of the Swiss National Bank (SNB) Thomas Moser said that cryptocurrencies and blockchain technology are too primitive to consider issuing a state-backed digital currency. Moser compared blockchain in its present condition with the “useless innovation” of compact discs (CDs), stating that “something similar has to happen with BTC. People will only switch to something new if it works better or is cheaper.”