From yesterday things haven’t changed much, as the evaluation of the cryptocurrency market capitalization is on the same levels it was yesterday at this time.

Submit a Press Release to Blockonomi

Looking at the global chart below you can see that the evaluation has increased to the downtrends resistance line in order to retest it for resistance and as the evaluation is still above the line we are soon going to see if the level breaks or the evaluation gets rejected by it and continues its downward trajectory. 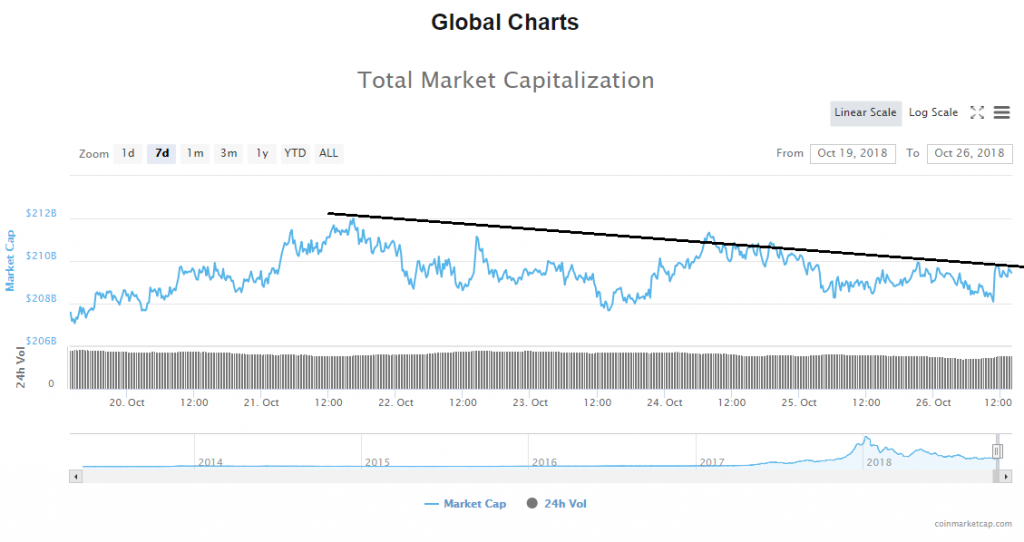 Bitcoin’s dominance is around the same levels as well but what is interesting is that a similar situation with the global chart can be seen- an interaction with the downtrends resistance. 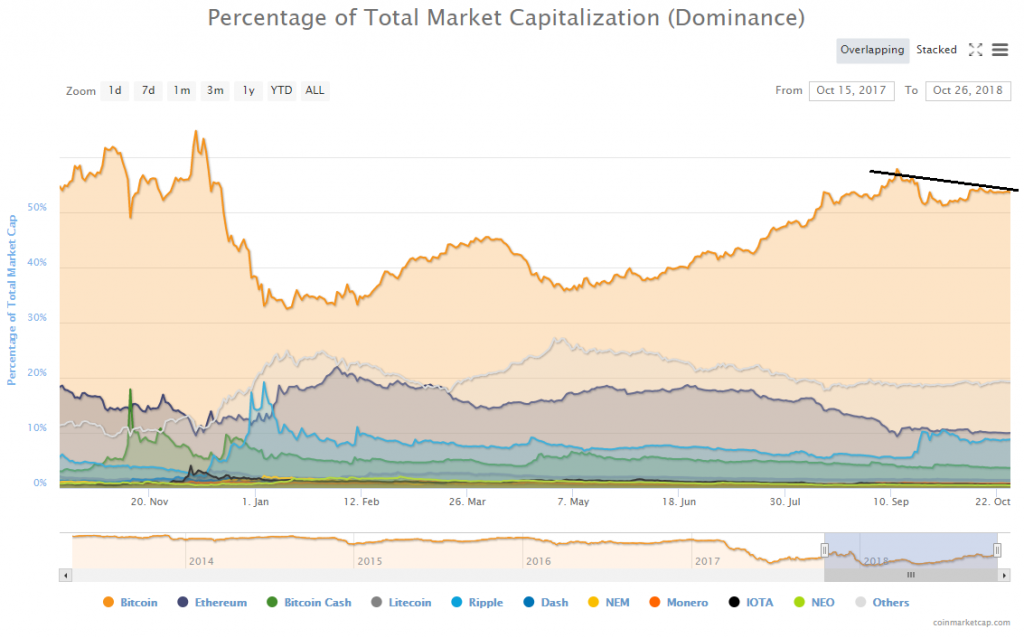 As you can see the evaluation is still below the level so a scenario in which we are going to see a breakout inversely correlated with the global chart evaluation would be possible.

As the price of Bitcoin, as well as the prices of other cryptos, are stuck in a range for quite some time now, many headlines are analytical in nature trying to figure out the direction of the next move. There is one headline that sticks out and that ties up with the yesterday’s headline and that is 100m Tether again being withdrawn from circulation.

Another 100 million Tether (USDT) were removed from Bitfinex and placed in the Tether treasury wallet, the removal of liquidity thus exceeding 1 billion coins. The balance of Bitfinex went as low as 3 million USDT but is rising once again as deposits are flowing in, taking the number back to around 7 million USDT.

This causes a lot of suspicions as traders and investors are getting more and more skeptical regarding the supposed dollar pegged crypto.

From yesterday’s low at $6505 the price of Bitcoin has increased to $6580 at the highest point today but has fallen quickly and is currently trading at $6538. 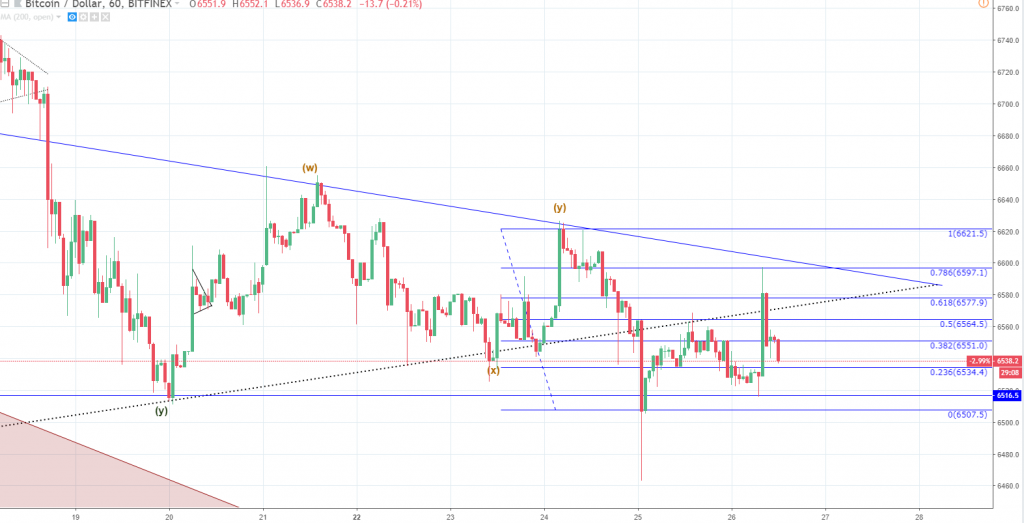 Looking at the hourly chart we can see that the spike up was up to the 0.786 Fibonacci retracement level but the candle closed below the 0.616. If you take into account the following red candle than you could say that the price closed below the 0.5 Fibonacci level as this move would only be a wick on the higher timeframe.

The price retested the triangle from which it previously broke and was rejected by its support which now serves as strong resistance and judging by the momentum followed by a quick rejection the move was a fakeout leading the price to fall back significantly lower with more downside to go now as it’s clearly not exceeding the prior high.

Zooming out to the 4-hour chart you can see that the wick is there as well as the wick made on the drow below the horizontal support significant level at $6516 which dipped into the area it wants to go. Looking at my Elliott Wave count you can see that I have removed previously expected two more waves X and Z as the price broke out from the triangle on the downside, marking the end of the correction as a WXY. 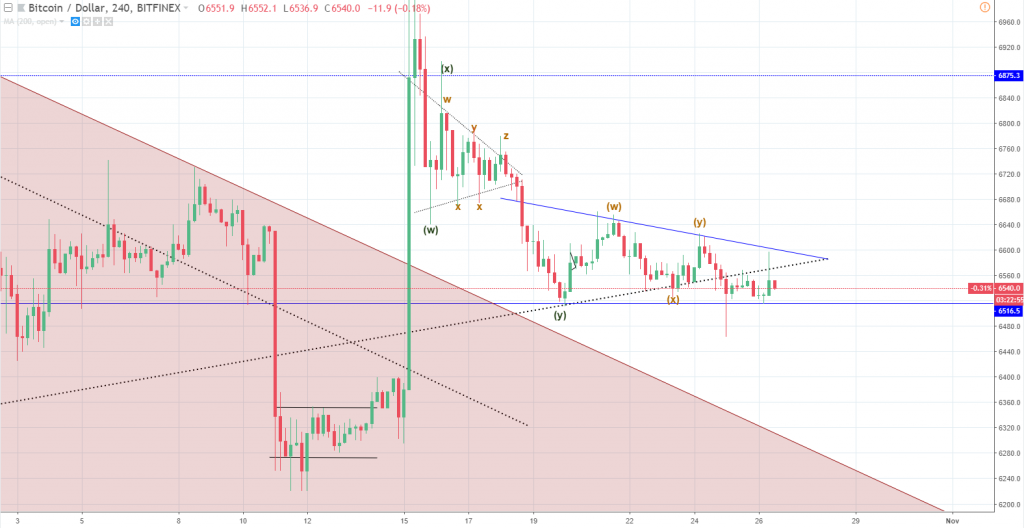 I haven’t labeled this current move just yet but I believe that its impulsive and that the spike we have seen today is the 2 corrective wave in an impulsive 12345 to the downside potentially all the way down to back inside the territory of the descending triangle from which the price action escaped due to the Tether “crash”.

This move might be another third zigzag correction in which case I would be looking at a retest of the descending’s triangle resistance line before the price continues upward exceeding the spike at $6937. That is highly unlikely as nothing on this chart looks bullish but there is a possibility still.

Zooming out further onto the daily chart we can see the descending triangle clearly. Currently, the price action is above its resistance line but that doesn’t still mean that we have seen a breakout as the price action has formed a cluster around the level a struggle between the buyers and the sellers is still in play. 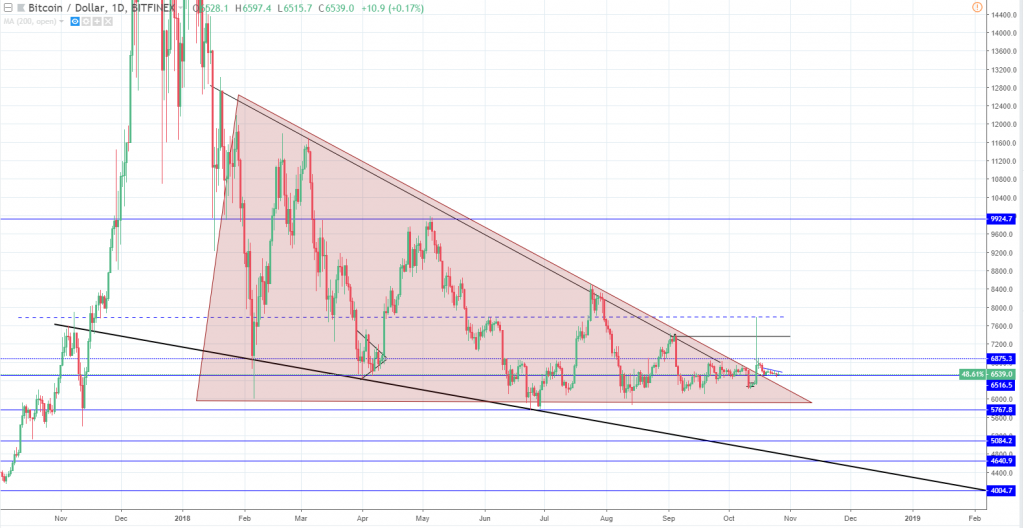 Ultimately I am expecting the price of Bitcoin to come down and create a lower low around $5000 area which is the next horizontal level significant enough to hold the momentum behind the sell-off. As the price of Bitcoin struggled to keep up its upward momentum and knowing the fundamental reason behind it the chart looks bearish so another increase wouldn’t change much for the overall picture until the price reaches around $10000, and even then I would be waiting for a confirmation on the higher low.

Technical indicators are signaling a sell on all time frames except monthly and if looked at the indicators separately the picture looks more line neutral.

As a lot of uncertainty overrules the market I wouldn’t recommend any trading particularly considering low volatility we have seen over the week. But sooner than later the price is going to start moving more aggressively and my educated guess is that will happen on the downside but we might see a further increase at first catching those who are now aware off guard.