From today’s open at around $210,23B the evaluation of the cryptocurrency market capitalization has fallen by 7.1 billion dollars at its lowest point.

Looking at the global chart you can see that the evalution has found support on the descending channel but on the same levels of the prior range resistance that was broken with a spike up on October 15th. As the evaluation is still interacting with the level we are yet to see if it serves as support or not, but at the time being it looks like the price has found some temporary support. 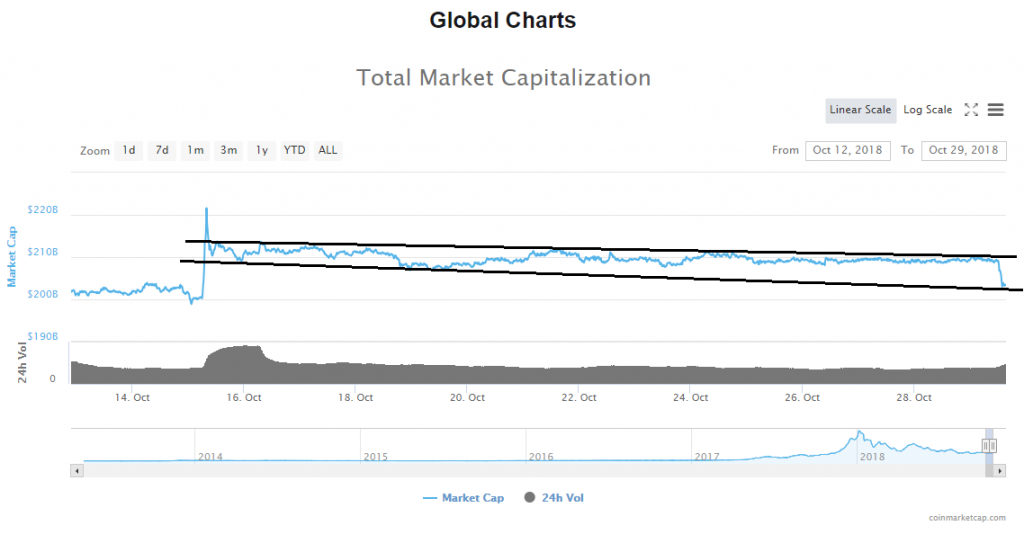 As the market cap evaluation drops, the evaluation of the Bitcoin’s market dominance increased from 53.58% to 54.15% at its highes point today. 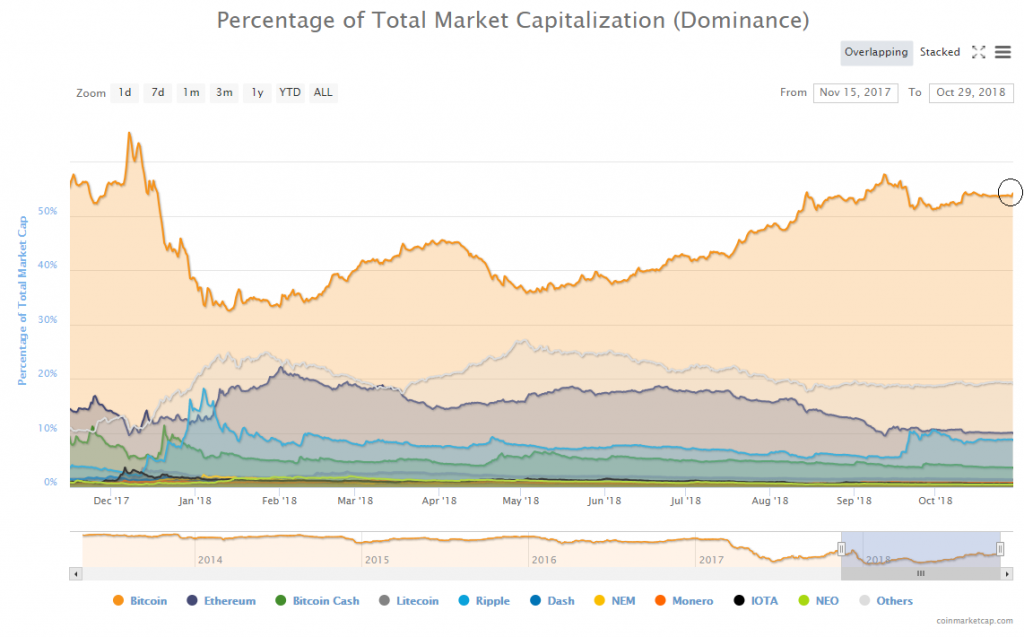 The spike starting to pop out on the chart means that the downtrend’s resistance line was broken and the further increase could be expected. If you recall some of my prior analysis, my target is around 68% which inversely correlates with the further drop in the market cap evaluation to around $177B levels. 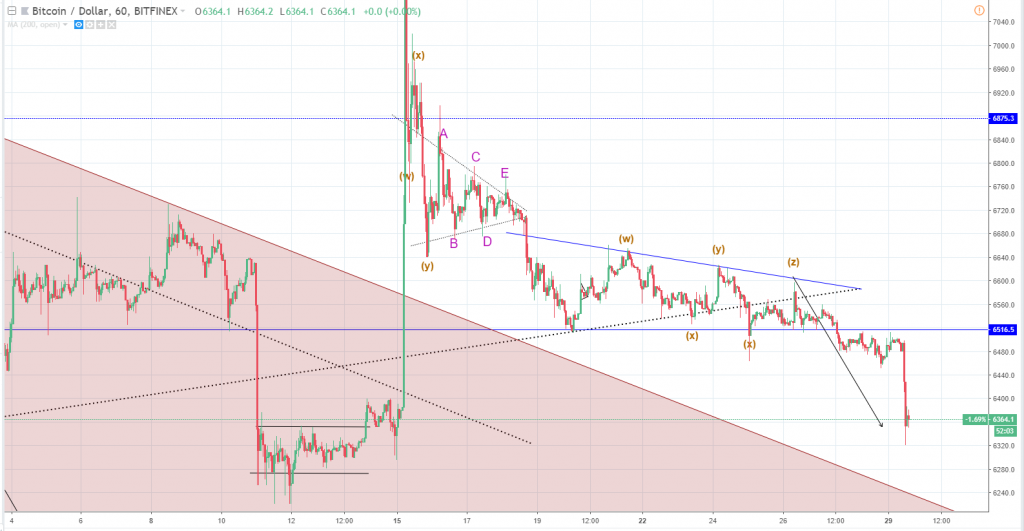 Looking at the hourly chart you can see that my October 24th analysis went spot on to the projected levels at the prior range resistance from which the spike upward happened. This makes a good case for a breakout invalidation as all the gains made by the price of Bitcoin were lost. Having in mind that the price spiked due to the Tether FUD this was expected but now we are yet to see when the price comes to the descending triangle’s resistance line which will surely happen as the momentum behind the down move looks stronger than the current horizontal level.

Bitcoin is in a sell zone.

From today’s high at $5.447 the price of EOS has spiked down by 7% at its lowest point today which was at $5 area, but the hourly candle closed at $5.14 above the significant horizontal level. 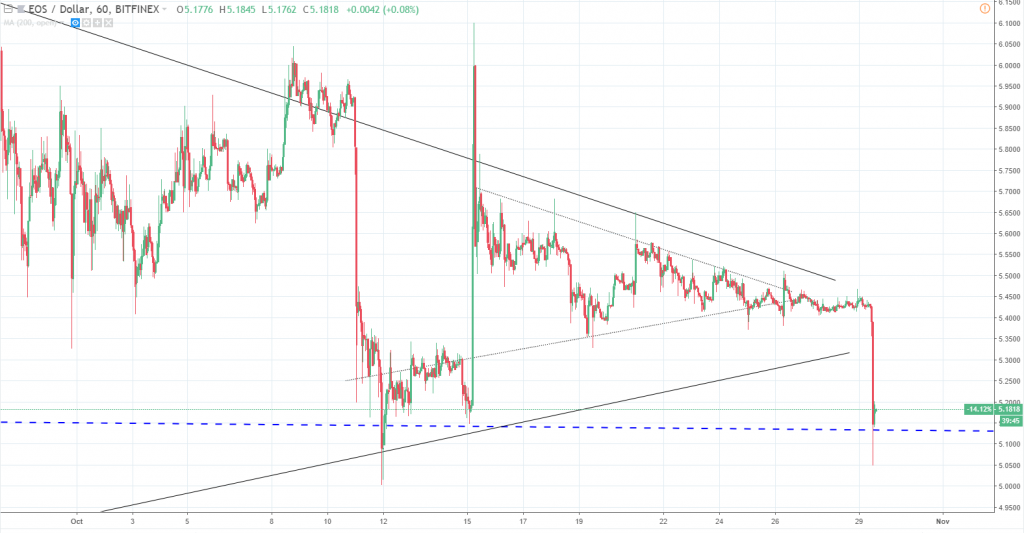 As you can see from the hourly chart both minor and intermediate triangle’s supports were broken and the price dipped below the horizontal significant level but managed to close above it.  Unlike the last time, this happened the current green candles are struggling to make up quickly for the loss indicating that the buyers aren’t present. If something, the current green candles all have wick from the upside indicating that sellers are. I believe that from here the price will collapse further below the horizontal support level.

EOS is in the sell zone as indicated by hourly chart technicals. 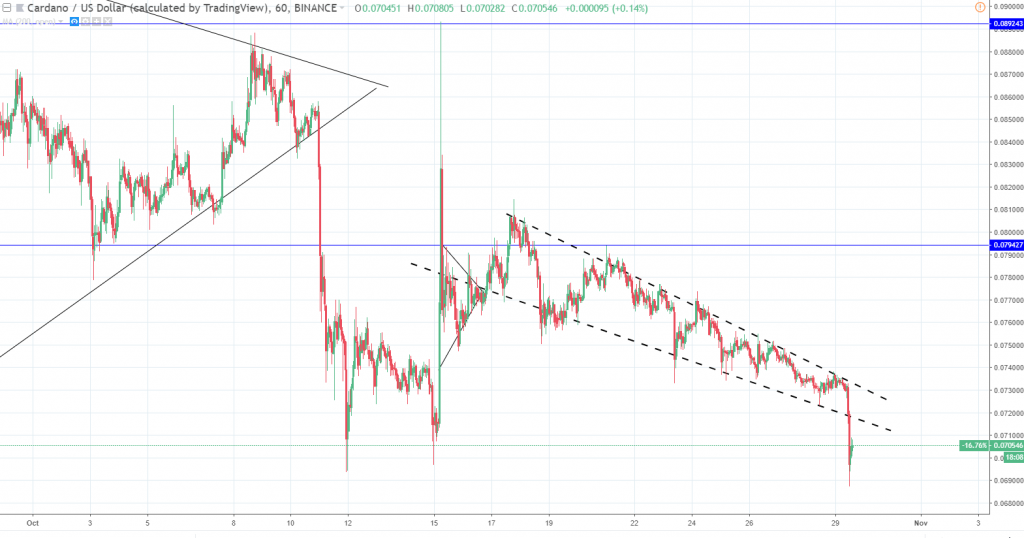 Looking at the hourly chart above you can see that the price broke out from the descending channel in which it was from 17th of October and went lower than the two prior lows. Currently, we are seeing green candles trying to make up the loss but like in the case of EOS, there is wick from the upside indicating that sellers are pushing the price and slowing the momentum down. I would expect that the price increases a bit further up to the prior range support and gets rejected there which would result in a further drop.

A further decline will most likely happen steeply and quickly after some period of consolidation. The momentum behind the drop looks serious as the market lost 7.1 billion dollars in evaluation in a matter of hours. As some significant levels have been broken investors and traders maybe start to get anxiousas as they figure that the prices may go lower.