From yesterday’s open at $210B the evaluation of the cryptocurrency market capitalization has increased by $6.36B.

As you can see from the global chart, the evaluation has started an uptrend which hasn’t been seen recently like this. Usually, we have seen a steep pop up and a steep downfall after, but now we can clearly see a trend forming. 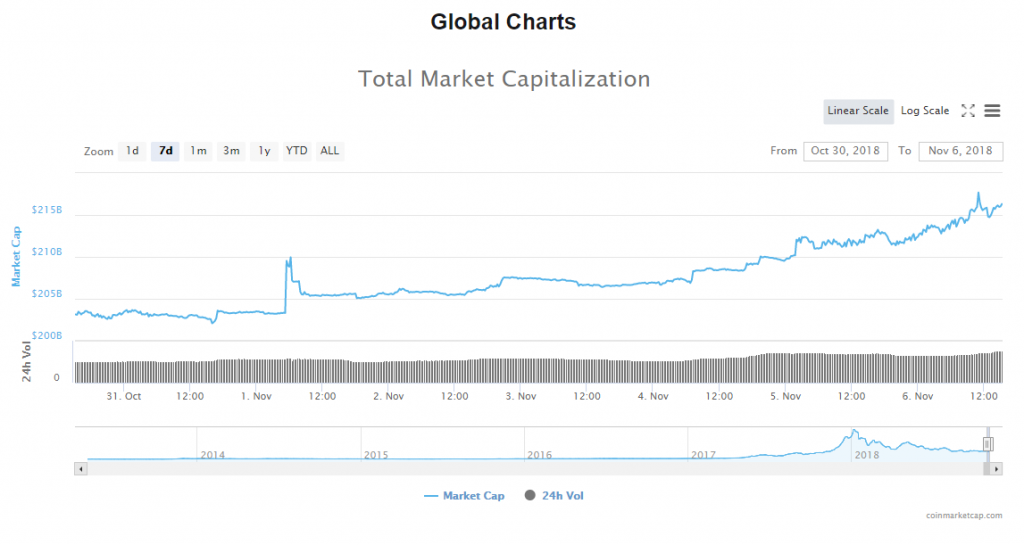 Zooming out to the 3 month period I have labeled the period which is similar to the current chart pattern somewhere from mid-August. 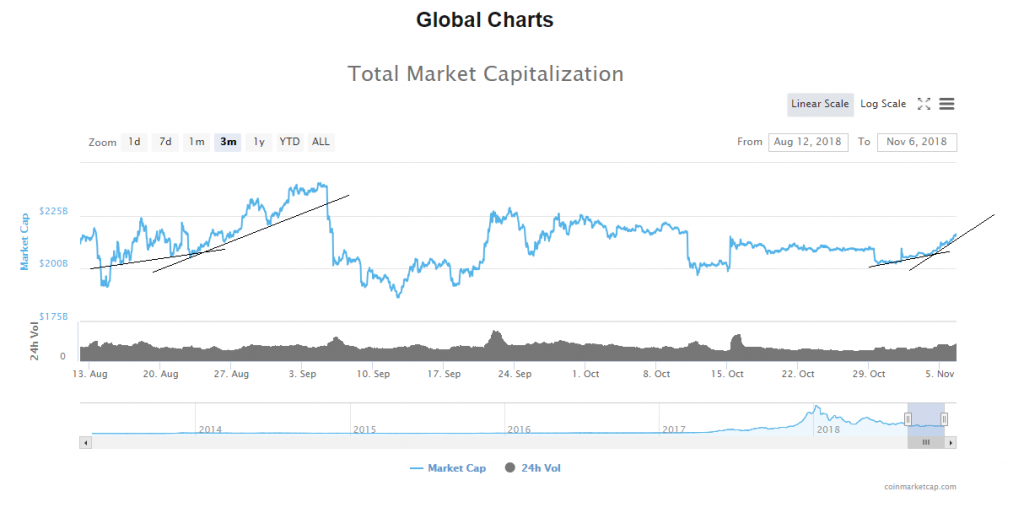 As you can see in August (most recently) we have seen the last increases similar to the current one. Having in mind that the symmetrical triangle was broken yesterday I believe that we are going to see this uptrend develop further up potentially to the levels of the prior high at around $238B.

Bitcoin’s dominance has fallen to the levels projected yesterday to the corrective triangle’s support line. As you can see from the chart below I have labeled once again my more long-term projection for the market and inversely for the Bitcoin’s market dominance. 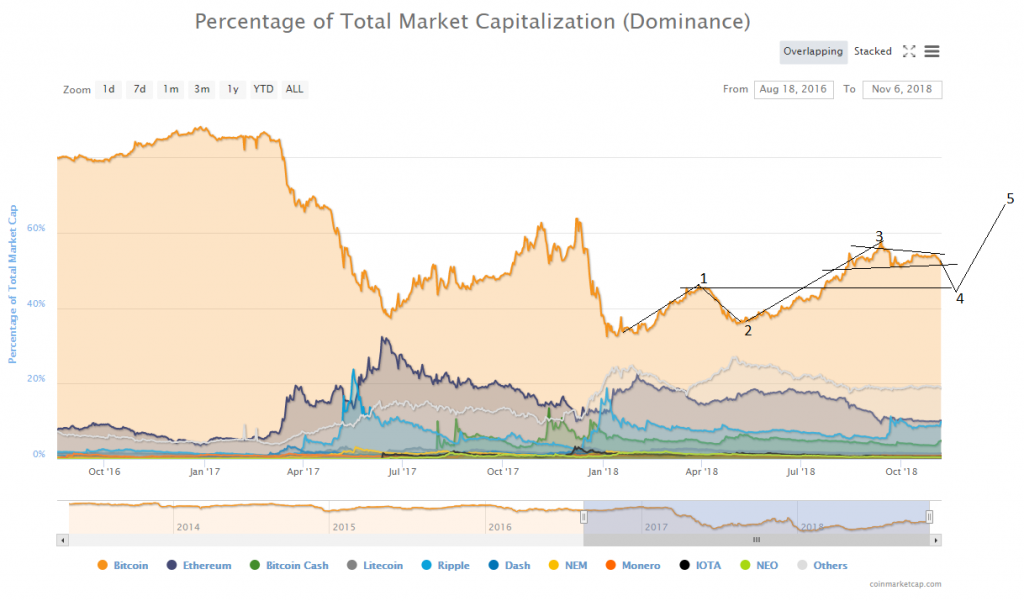 These labeling are mentioned in some of my analysis last month, but as the 4 wave is now developing I stress out the possibility of a big correction which will catch up everybody off guard thinking that the bear market is over. The 4 wave could go to around 45,12% before it continues its uptrend final wave 5 whos target I have projected to be around 68% at the end of the bear market.

From yesterday things haven’t changed much for the price of Bitcoin but it did for my Elliot Wave Projection.

Yesterday’s low at $6438 was the end of the 4 wave and the final one occurred. As you can see the price failed to go beyond the horizontal significant level for now which makes it difficult to call out the end of the increase as the 5 wave can end on the same levels as wave 3 so I cannot say conclusively if we are going to see further increase before a correction to the downside. If we do that’s going to be up to $6552 at max which is slightly above the mentioned horizontal level.

Zooming out to the 4-hour chart you can see my other Elliott Wave labeling and in this scenario a bearish projection. 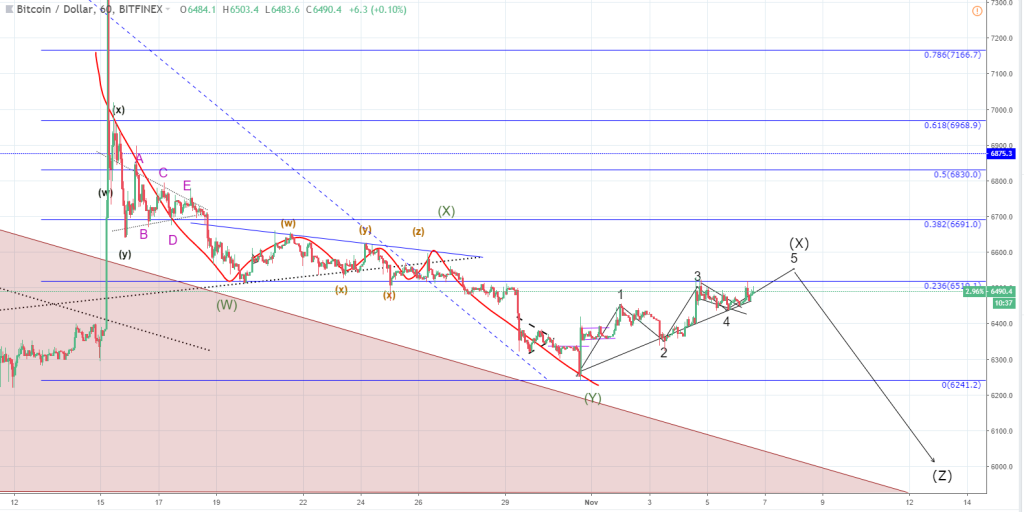 As you can see an intermediate WXY correction has been completed after which a 5 wave structure is currently developing. In this scenario, the 5 wave structure is only a recovery wave second X before another drop in price as the correction gets extended by two more waves. If this is true then I would be looking at the $6000 area for the target at first and then a lower low scenario to around $5200.

If the correction ended on the Y wave and the current 5 wave structure is impulsive than a correction will occur followed by a further increase in price as this was only the first wave of the impulse of a higher degree. 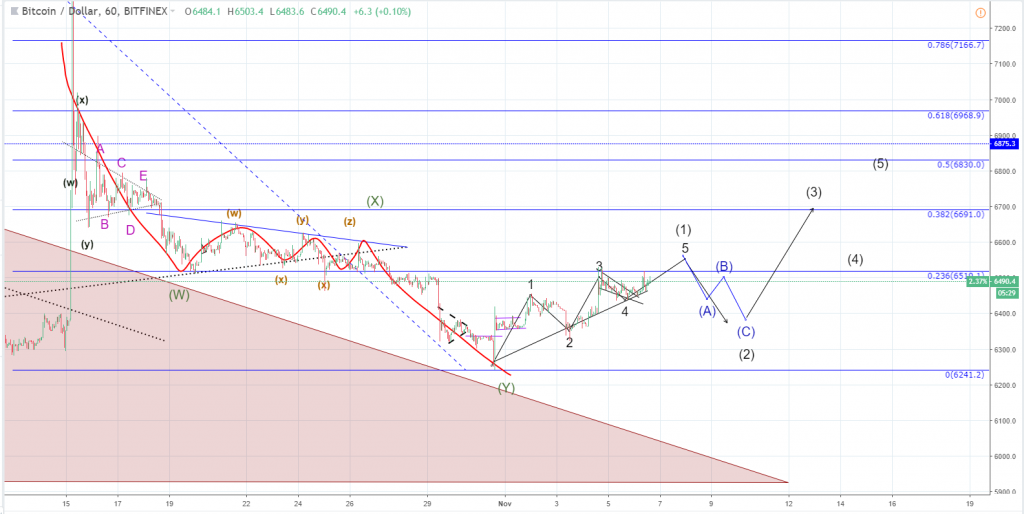 On the graph above you can see my bullish projection whose target I see fit around $6830 which is at the 0.5 Fibonacci retracement level measured from the hourly candle close of the October 15. spike.

In both cases in the short-term, I would be expecting a correction for the price of Bitcoin from which we are going to conclude the validity of the counts. If the price gets below the 0 Fibonacci retracement line on the way down than the bullish scenario will get invalidated.

The post Crypto Market Update: Up by $6.36B Bitcoin (BTC) Price Analysis appeared first on Blockonomi.