Want to get paid in cryptocurrency? That’s a question answered by a recent poll held by Sage which revealed that 31% of respondents would be willing to accept some or all of their salary in the form of cryptocurrency. But with all the potential legal hurdles and other issues, how can those who want to get paid in crypto realize their dreams? Moreover, how can companies finally begin to reap the benefits (like no bank fees, just to name one)of paying their employees in crypto? That’s where the crypto startup WorkChain.io comes in. We had a chat with WorkChain CEO Ryan Fyfe to learn more about how companies can now transition into paying their employees in crypto. 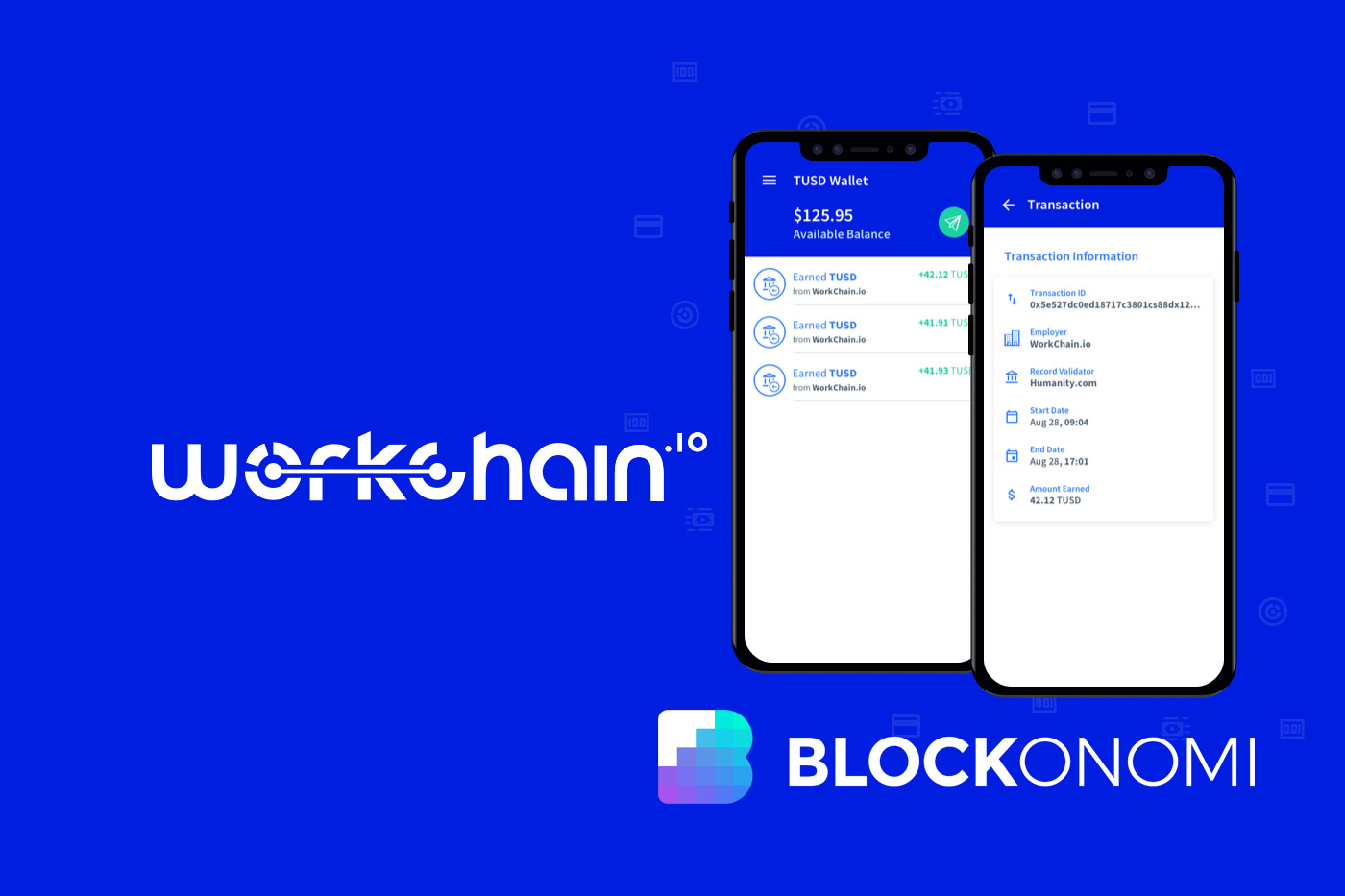 Get Paid Daily (Not Monthly)

While it may seem simple on the surface to pay people using crypto, things get a lot more complicated once labor laws and regulations get involved. There are issues relating to taxes, accounting practices, and myriad of other issues that would make your average accountants head spin. But serial entrepreneur Ryan Fyfe, who previously founded the cloud based workforce management software company Humanity.com, thinks he has a potential solution in his new startup.

Fyfe had this to say about his latest endeavor, WorkChain.io:

“We’re bringing paychecks into real-time on the blockchain, giving workers instant access to their earnings. The weekly, bi-weekly or monthly payroll model most of the world uses today is a relic of the Industrial Age, and we intend to disrupt it.

Really what we’re doing is removing the reliance on banks making paychecks on demand. Everything else is these days: food, groceries, rides, you name it, it exists. Why, then, do we still wait weeks to get paid and let someone else dictate to us when it’ll happen? It makes no sense. We want to give people their paychecks on demand, and the financial control that comes with it.”

So without further ado, here’s our exclusive interview with Ryan Fyfe.

Interview with Ryan Fyfe, CEO of WorkChain.io and founder of Humanity.com

Robert DeVoe, Blockonomi.com: A recent survey suggests that many people would be willing to receive at least a portion of their salary in cryptocurrency. Where do you think this trend will be over the next decade?

Ryan Fyfe: The results of the survey are really encouraging for what we’re building. It shows the demand is growing. But we’re not glossing over things. There are definitely some barriers to overcome, like crypto volatility, bridging the gap between fiat and crypto, and giving people the confidence that their earnings are protected, for instance. All things we’re working on.

As people increasingly understand the benefits of crypto over fiat — speed, security, decentralization — I believe the demand for earning it will grow over the next decade. And we plan to be right there out in front pushing this adoption.

“Streaming Money Will Change How We Access Our Money”

Robert: In one of his talks, bitcoin commentator and author Andreas Antonopoulos discussed an idea he called streaming money. In simple terms, the idea is that in the future, employees might get paid every minute instead of every month. Do you think this idea will come to fruition, and if so, what will need to happen first before it can be a reality?

Ryan: Andreas does an amazing job of articulating the potential of blockchain to transform the way people will be paid. His vision of ‘streaming money’ — which we share entirely — will revolutionize the entire financial ecosystem. Just like streaming movies and music changed how the world consumes media, streaming money will change how we access our money and the immediacy we’ll come to expect.

With real-time payments already possible on our platform, we’re on the way to reaching Andreas’ vision of streaming money. Using smart contracts, an employee and employer agree about the work that’s to be completed, and the compensation for it. Then, as the work is completed, the earnings become instantly available.

At this stage, it is a step shy of Andreas’ idea of the money being paid every second, as the employee still needs to choose to cash out and there are fees connected with this process. But we’re working on mitigating these costs through payroll channels, which are similar to the lightning network he talks about.

Like with all blockchain uses, there are some things that still need to happen to make it come to fruition: demand from employees, employers adjusting to a new model, and, as I mentioned earlier, bringing down transaction costs.

“Taxes and Income Reporting are Crypto-Wide Points of Consternation”

Robert: One concern that often comes up when discussing paying salaries in cryptocurrency is the issue of taxes and income reporting. What are some of the barriers that employers are seeing today in this regard, and what are some ways that could alleviate these legal burdens?

Ryan: This is what we hear a lot from employers. And, being an employer of 150 people with my previous company, something we’ve put a lot of thought into. With so many different taxes and deductions involved, particularly as you begin to cross borders, it can make getting paid in crypto seem like an added burden.

To overcome it, we only talk in net payments. That is, an employer still uses the same HR or payroll system to calculate taxes and deductions, then WorkChain.io integrates with this system and pays out the net amount. Effectively, to begin with, we’re replacing the dependence on fiat and banks; not replacing existing payroll providers.

We know it’s not unique to us. Taxes and income reporting are crypto-wide points of consternation. You have governments and regulators working on them around the clock. Like with anything, over time I expect they will diminish as barriers, and crypto payments will become more commonplace. When people first hired people remotely, similar kinds of issues would have come up. Now, hiring someone in a different country is hardly concerning at all.

Robert: Former Sen. Ron Paul recently wrote in his blog that the US government should institute a law that would prevent all taxation on exchanges between cryptocurrency and fiat currency, among other things. This, he suggested, will increase the adoption of cryptocurrency. What’s your opinion on his suggestion, and what would be your suggestion to reduce legal barriers in such a way as to encourage real and strong cryptocurrency adoption in places like the United States?

Ryan: Ron is the consummate libertarian. No surprise he supports the crypto cause given the decentralized, libertarian ideals behind it. It’s hard to see the feds agreeing to what he’s proposing. It’s too much of an existential threat to the traditional fiat system. And not sure getting rid of all taxes is realistic. Doing that would make crypto a haven for tax evasion and undermine its long-term viability. But, certainly, capital gains would be a good place to start.

Getting governments to embrace crypto more, for example through favorable regulation or monetary policy, will no doubt have an impact on adoption. We are starting to see this and it’s important that these decisions aren’t made in isolation by politicians and bureaucrats – people from within the crypto industry should have input.

Personally, though, I don’t think the legal barriers are that much of a roadblock standing in the way of crypto and the mainstream. Take a look at Coinbase, they make purchasing crypto not much harder than buying something with your credit card on eBay or Amazon. What I see as the bigger barrier is some real-world applications for crypto to give more people the benefits that crypto promises.

The crypto segment needs to mature and move beyond the hype into real utility for
adoption to take off. And, maybe like Ron says, it’ll take another recession for this to happen. After all, what jump-started bitcoin ten years ago was a recession. The one coming could but just as large. This time, with the crypto infrastructure already in place, it could be the event that tips the scales.

Looking further into the future, it’s imaginable that cryptocurrency could enable taxes to be programmed into their use. For instance, a government could issue a native token as their currency, then each time it’s spent taxes are kicked back automatically, removing a lot of reporting, making tax more consumption-based, and streamling collection on the blockchain.

Robert: It can be difficult to make predictions, but in your opinion, which specific cryptocurrencies or which general types of cryptocurrencies do you foresee as being the most important when it comes to paying salaries? For example, do you think bitcoin will be the king, or will it be some sort of stablecoin that is pegged to a fiat currency like the US dollar?

Ryan: I think bitcoin will continue to be one of the dominant cryptocurrencies. But, when it comes to paying salaries, bitcoin and other cryptocurrencies have volatility attached to them, which makes stablecoins critical to crypto paychecks.

If salaries were paid in bitcoin, Ethereum or any other standard cryptocurrency, employers and employees are subject to price swings that could make payroll far more expensive, or a paycheck far less valuable overnight. Essentially, we’d be handing out lottery tickets instead of paychecks.

For crypto salaries to really take hold, employers and employees must have the stability and confidence of knowing what they pay – or get paid – today, will be the same value tomorrow, and the next day. Stablecoins provide this stability.

Our platform is built on Ethereum, so it supports ETH and any ERC20 token. Initially, as we go to market, we are working with TrueUSD and EURS, which are backed one-for-one by US Dollars and the Euro, respectively. But our payroll wallet — where users receive their crypto paychecks — is flexible and will be able to support other blockchains, so as the space evolves we’ll be able to move with it.

It’s clear that we still have a long way to go before major multinational companies are paying their employees in crypto. However, it’s clear that things are starting to change slowly. In December of 2017, major Japanese conglomerate GMO announced a program to allow their employees to elect to receive a portion of their salary in bitcoin.

Perhaps the time will come sooner, rather than later, when small and mid-sized companies start offering salaries in crypto that are paid out daily in stablecoins. Once that happens, it’s only a matter of time until the multinational heavyweights join in. Simply put, the prospect of getting paid daily instead of every 2 to 4 weeks could fundamentally change the way people are paid.

« Bitcoin Mining Consumes Over 3X the Energy of Gold Mining: Research
How’s This for Starters? App to Offer ‘Generous’ Discounts and Loyalty Schemes for Diners »