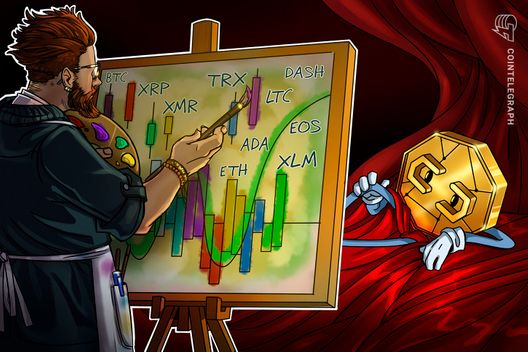 The world did not come to an end after the financial crisis of 2007–2008. Similarly, this bear market will also pass and the stronger cryptocurrencies will rise and reward investors.

Bottoms are formed during market capitulations. After Bitcoin broke below the critical support of $5,900, investors dumped their holdings, fearing a complete loss on investment. For someone who does not believe in the future of cryptocurrencies and who was in it only for making a quick buck, it might be the right thing to do.

However, for the others, who believe in the story of blockchain and cryptocurrencies, the current fall offers a great opportunity to invest for the long term. During bottom formations, the outlook is always very dire and every bit of news is viewed as negative.

One such news was the U.S. Justice Department investigating the probability of Bitcoin manipulation in 2017 using stablecoin Tether. Though we believe that any regulatory step to protect retail investors is a long-term positive, the markets did not view it in the same way.

After the fall, while naysayers are claiming victory and forecasting a further fall, the bulls see an opportunity to buy for the long term. It is difficult to predict a bottom when markets are gripped in fear. Hence, we believe it is better to wait for the markets to show signs of stabilization before attempting a buy.

The software companies did not vanish after the dotcom bubble. The world did not come to an end after the financial crisis of 2007–2008. In the same way, this bear market will also pass and the stronger cryptocurrencies will rise and reward investors. Therefore, be patient and let the markets offer us a relatively low-risk buying opportunity.

Bitcoin nosedived to a low of $4,368.69 on Nov.20. The fall of the past two days gives the impression of panic selling by investors. Usually bottoms are formed after such a round of liquidation.

Both moving averages have turned down, which is a negative sign. The RSI has hit deeply oversold levels, which suggests that selling has been overdone and a pullback is likely.

The bulls might attempt to carry the BTC/USD pair to the downtrend line, which can prove to be a roadblock. If the downtrend line is crossed, we expect the bears to offer strong resistance in the zone of $5,450–$5,700.

On the other hand, if the bulls successfully defend $4,368.69, the probability of it being the bottom increases. It is difficult to pinpoint the bottom right away. We can confirm a bottom only in hindsight.

Ripple has emerged as one of the outperformers during the recent fall. It has stretched its lead over Ethereum after becoming the second most valuable cryptocurrency in terms of market capitalization.

The XRP/USD pair is currently finding support between the trendline and $0.40. Both the moving averages remain flat, which points to range bound action in the near term. On the upside, $0.519 and $0.565 will act as resistances.

On the downside, if the bears sink prices below $0.40, a fall to $0.37185 and below that to $0.26913 is probable. Though we are relatively bullish on the digital currency, we shall wait for a new buy setup to form before proposing any trade.

Ethereum extended its fall on Nov. 20 and broke below the support of $136. The RSI has reached deeply oversold levels, which previously resulted in a pullback.

Currently, the bulls are attempting to pullback from the $126.20 level, which is likely to face a stiff resistance at $167.32. The downtrending 20-day EMA will also be a difficult hurdle to cross.

If the next leg down breaks below $126.20, the ETH/USD pair can extend its decline to $110. As the trend is down, we shall wait for a new reliable setup to form before recommending a trade.

Stellar broke down of the ascending channel on Nov. 19 and followed it up with another sharp fall the next day. However, the bulls have managed to hold the critical support at $0.184.

The current pullback attempt is likely to face a stiff resistance at the support line of the channel and above it at the downtrend line.

EOS broke below the critical support of $3.8723 and dived to a low of $3.4703 on Nov. 20. In doing so, the RSI dipped into deeply oversold territory that indicates that the selling has been overdone and a pullback is probable. Currently, the bulls are attempting to climb back above the overhead resistance at $3.8723. If successful, the pullback can extend to $4.493, which might again act as a stiff resistance.

If the pullback stalls at $4.1778, the bears will again attempt to sink the EOS/USD pair below the support at $3.8723. If successful, the decline can extend to the next support at $3. The falling 20-day EMA and the RSI in the oversold territory show that the bears have the upper hand.

However, as the trend is down, any attempt to pullback will face a stiff resistance at the 20-day EMA that is sloping down. Above this, the next major resistance will be in the $47.246–$49.466 zone.

We believe that after such a sharp fall, the LTC/USD pair might attempt to form a bottom around current levels. However, the traders should wait for a confirmed bottom and a new buy setup to form before attempting to buy.

Cardano fell in the past two days and overshot our suggested support of $0.043722 and made an intraday low of $0.041572. The RSI has declined deep into the oversold territory, which suggests a pullback is around the corner.

The pullback can carry the ADA/USD pair to the overhead resistance at $0.060105. However, the trend is down, hence, any attempt to recover will face a hurdle at the previous support of $0.060105 and at the 20-day EMA, which is sloping down.

Monero is trying to find support close to the $64.525 level. The RSI has entered deeply oversold levels, which shows that selling has been incessant. We believe that the bulls will attempt a pullback from the current levels that can carry the digital currency to the overhead resistance at $81.

Our bearish view will be invalidated if the bulls scale $81 and sustain above it. Currently, there are no bullish patterns that suggest a buy, hence, it is best to remain on the sidelines.

In a down trending market, every previous support acts as a resistance after it is broken down. Hence, we anticipate a stiff resistance at $0.01587681 and $0.0183. If the TRX/USD pair turns down from one of these levels, the bears will attempt to sink the price to the next support at $0.00844479.

On the other hand, if the bulls scale $0.0183 within the next few days, it will confirm that the current fall was a fake breakdown. We shall wait for the trend reversal to happen before suggesting any trade in it.

Dash is currently trading inside a descending channel. It broke below the critical support of $129.58 on Nov. 19 and made a new 52-week low at $98.01 on the next day. It is presently finding support at the bottom of the channel. The bulls might attempt to push prices back above the $129.58 resistance. If successful, the pullback can extend to the upper end of the channel, close to $160.

However, as the DASH/USD pair is in a downtrend, we anticipate a strong resistance at $129.58 and at the 20-day EMA. During the next down move, if the support at $98.01 breaks, the next support is at $75. Traders should wait for the trend to reverse and a bottom to form before initiating any long positions in it.

« Wormhole Brings Smart Contacts and Token Issuance to Bitcoin Cash
No, Jamie Dimon and Warren Buffett Won’t Have the Last Laugh on Bitcoin »