From yesterday when the market capitalization hit $140,876,000,00 which is the years low so far, the evaluation stabilized and has recovered since. 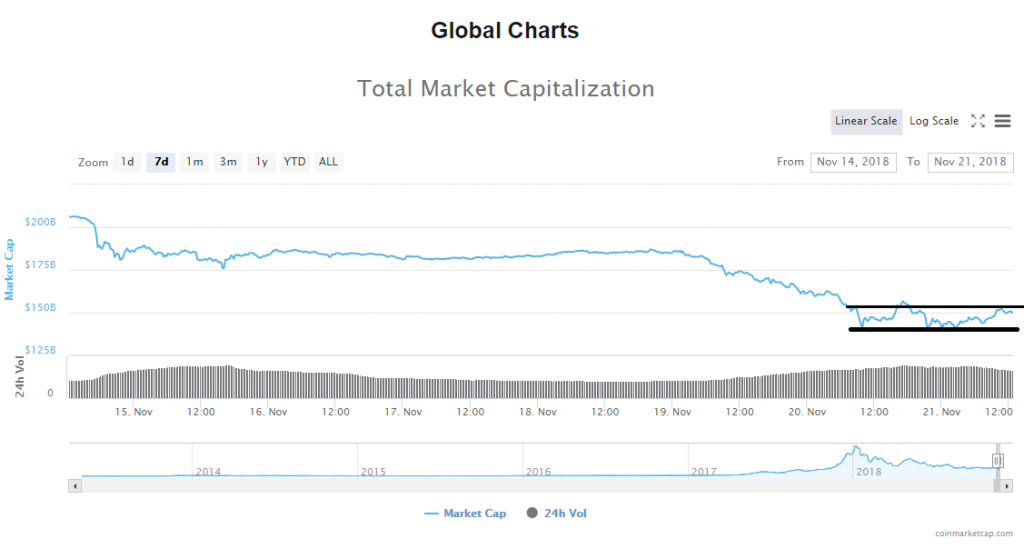 As the market capitalization increased by around 9.52 billion dollars from its recent low the top 100 coins are mostly in green with an average percentage of change being around 3.6%. The biggest gainers are Factom with an increase of 26%, Nexo with 31.7% and Ark with an increase of 34.6%.

Bitcoin’s market dominance evaluation is again on the rise and is up from yesterday by 0.4%. 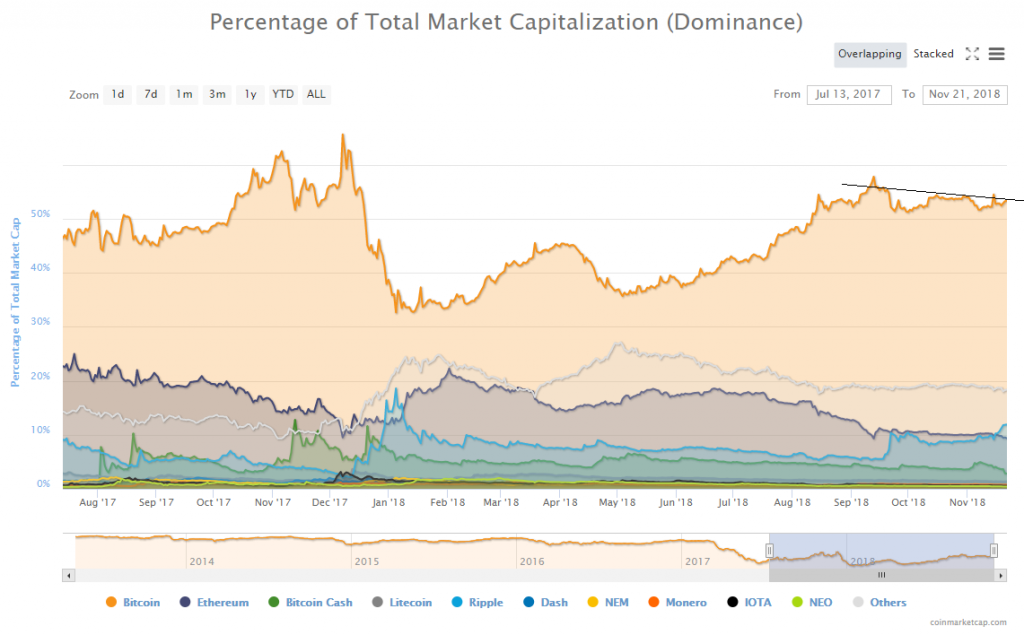 From yesterday’s high at $4959 the price of Bitcoin has fallen by 6% measured to the current levels on which the cryptocurrency is trading which is at $4655.8. 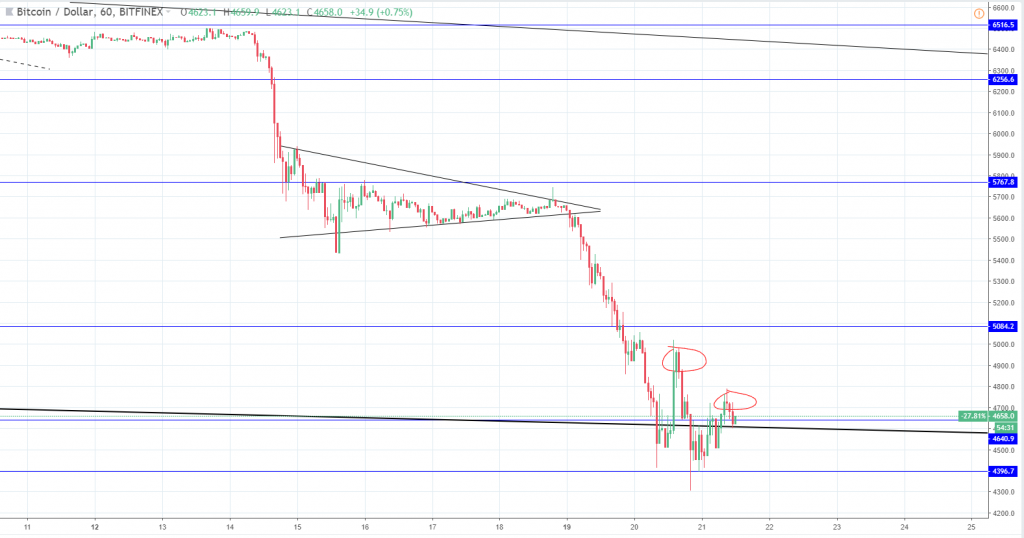 Looking at the hourly chart you can see that the price went even lower, interacting with the next horizontal support level in line at around $4400 but has managed to go again above the intersection of the two significant levels – horizontal support and the descending channels baseline support. As you can see yesterday’s high is currently higher than today’s which is why it is reasonable to say that we are still in a downtrend. The minor push above may be only short-lived and we might see another straightforward downfall as the price struggles to recover. On the other hand, this current interaction with the descending channels baseline support might be another retest for support as the price wants to get higher so what happens now will indicate what will be happening in the upcoming period.

Bitcoin is in the neutral zone as indicated by the hourly chart technicals. Even though you can clearly see it says a buy overall, looking at the indicators separately you can see the neutrality. 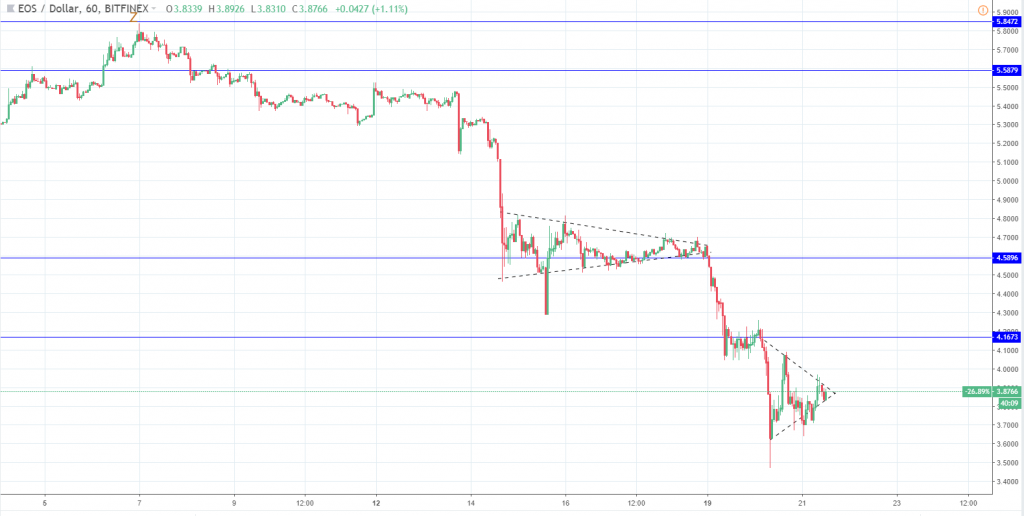 On the hourly chart, we can see a similar situation like in the case of Bitcoin but a symmetrical triangle formation which indicates consolidation can be seen clearly. The price broke the support at $4.16 after which it spiked to $3.47 which is its year’s low as well. As the price action is currently inside a symmetrical triangle the likelihood of a breakout is even from both sides so its hard to say where the price is going. We might see an increase at first followed by more downside or continue down in a straight line.

Hourly chart technical indicators are painting the same picture as in the case of Bitcoin.

From yesterday’s high at $36.7 the price of Litecoin has fallen by 5.5% and is currently being traded at $34.697, the price went further down today to around $32.7 area but has recovered since slightly.

If you remember my recent LTC analysis I have projected the ghost bar chart from the last time the price action created a similar pattern and I have projected it that the price is will break below the down channel’s support line (interrupted line), to around $36. As you can see my projection was correct but the price went even further down. As a similar chart pattern is seen in the case of Litecoin as in the case of the other two analyzed coins the same implies – the direction is down overall but there isn’t still a clear indication on whether the price is heading a bit up at first to recover for the made loss.

Litecoin’s hourly chart technical indicators are like in the case of Bitcoin and EOS indicating aneutrall zone.

As the market experienced a major move down a period of stillness is occurring as the market participants consolidate. This consolidation may be interrupted by new participants coming to the market either to buy or sell which would determine the next outcome of the current minor symmetrical triangle which we have seen on the charts of three major cryptocurrencies covered in this update. As the crpytos are strongly correlated we might see an increase in bitcoin’s dominance at first as altcoin positions get liquidated which would be the first sign that another sell-off is about to start so pay close atttention on the evaluation of the Bitcoin’s market dominance.