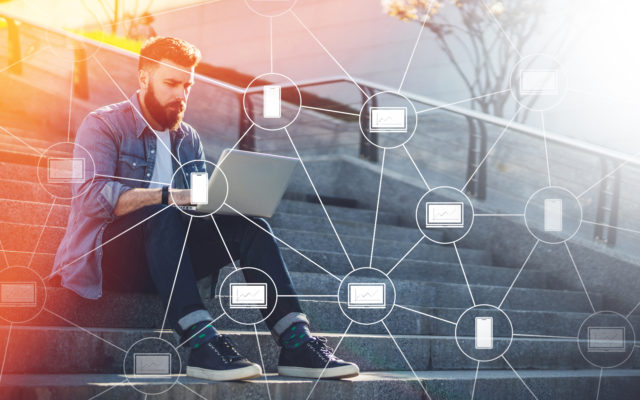 From autonomous robots to wealth management: here are four promising startups at the end of 2018.

ICO projects with no real use are just not attractive to investors anymore. According to ICODATA $150 million were raised through the month of October 2018 in token sales. That’s a substantial decline from the $1.5 billion raised in January the same year.

“The blockchain space is getting to the point where there’s a ceiling in sight,” – claims Ethereum co-founder Vitalik Buterin. According to him, the next step will involve “real applications of real economic activity.”

Regardless of the statements, as well as the hopes that the last part of 2018 will bring a return to practicality, it’s quite challenging for projects to stray away from the information noise. Hence, we’ve decided to pick out four notable blockchain-based projects which are yet to gain momentum in the media, despite providing solutions to actual issues.

Problem: the ever-increasing complexity of supply chains, production, as well as urban life which is getting hard to handle

Solution: enable users to order goods, as well as services, from autonomous robots which work hand-in-hand with each other.

Robonomics Network represents an Ethereum-based network infrastructure which is designated for the integration of robotic factories within the industry and within smart cities. Ever since 2015, an experienced team of scientists and blockchain developers in Russia have been working on a solution which will enable autonomous robots to cooperate in between themselves, making economic and efficient decisions without any additional human intervention.

The main purpose of the network is to control, distribute, and provide services by using cyber-physical systems. The network is adaptable to the needs of people and it’s built on the basis of currently existing market mechanisms.

By expanding the existing capabilities of the basic communication protocol, autonomous robots are actually able to interact with the abovementioned market mechanisms and with other contractual obligations. As such, the project is designated to provide the necessary tools for the designers of new cities, industrial zones, and to provide the user with a direct access to ordering products and services.

The platform is also capable of solving issues and challenges of global importance. In 2017, the world’s first international blockchain-based transaction for the transfer of carbon units was conducted using Robonomics, with technical support from Microsoft.

Yet another of the applications of the platform can be outlined when it comes to combating wildfires. Disasters such as the one we had to witness in California this year could very well be avoided if the authorities used the unmanned Robonomics-based drones which are used to monitor forests with thermal cameras. This system is able to work throughout the entire year and has been tested successfully.

Solution: to enable stores as well as cafes to become merchants of cryptocurrencies

The wide majority of existing merchants don’t yet accept cryptocurrencies. This is due to the volatility of the market, the lack of an existing payment infrastructure and their overall inability to be used within quick microtransactions.

Cyclebit believes that massive price fluctuated could be easily mitigated by the overly widespread ownership and usage which is facilitated by providing easy ways to pay with digital currencies. The startup has managed to come up with a solution which enables any point of sale to install a simple IOS and Android-supported application which runs to receive cryptocurrencies as simply as it does fiat money. The application also facilitates payments from online cryptocurrency payments.

The solution is currently being deployed across 130 different Nostrum coffee shops throughout Spain where customers can now buy a cup of latte with BTC. The startup has managed to access a working ecosystem brought by Ibox – an omnichannel payment platform which has over 200,000 point-of-sales which are marked for imminent roll-out.

Solution: use the Proof of Assignment algorithm to make mining possible on IoT devices

IOTW represents an IOT blockchain infrastructure which brings instantaneous throughput that’s achieved through Proof of Assignment protocol. This is what enables micro-mining as well as instant transactions on all of the connected devices without the need for any extra hardware. This allows blockchain to step through in the household industry and business.

PoA allows the network to speed up which is what makes it better for IoT devices. It also eliminates the centralization issues of PoW and PoS.

The Block Witnessing Protocol provides an additional layer of security for the network compared to existing blockchain architectures. It does so by taking advantage of a witnessing pool which makes the network essentially smaller and holding hundreds of times fewer copies and ledgers.

The project has already been tested on more than 1,000 IOT devices which run on a single trusted node on the blockchain. Current results display 3,000 TX/S for long distance transactions and 100,000 TX/S for local ones.

Problem: existing wealth management services fail to use blockchain because of the low-trust environment of the cryptocurrency field

TrustVerse is a personal digital asset and wealth management platform which is based on blockchain technology and artificial intelligence (AI). It’s a deep-learning digital assistant which caters to all digital holding facets. The platform is powered by an AI deep-neural as well as multi-data financial portfolio optimization engine and it provides a system of reliable smart contracts which simplify legacy planning as well as inheritance organization and the overall transfer of digital assets. It functions as a one-stop shop for almost everything a person might need – from managing their taxes, portfolios, identities to distributing their actual assets once they pass away.

The platform also contains a lot of tools for digital wealth management. Smart contracts can help you assist life scheduling services which can be used to assets derived from inheritance – all of this is stored on a public, verifiable blockchain.

Unlike traditional financial services where a certain organization is storing personal data on a centralized server, TrustVerse won’t store any type of personal information as it provides services to users which are authenticated by a technology that’s jointly developed with tech mogul Microsoft.