Humans is a global resource bank for businesses and people. The project is designed to transform how we work, live, and relate with each other.

HUMANS catalogs the knowledge, skills, and characteristics of humans, creating what the project refers to as a Global HUMANS Resource Bank. With HUMANS, you can search for people. 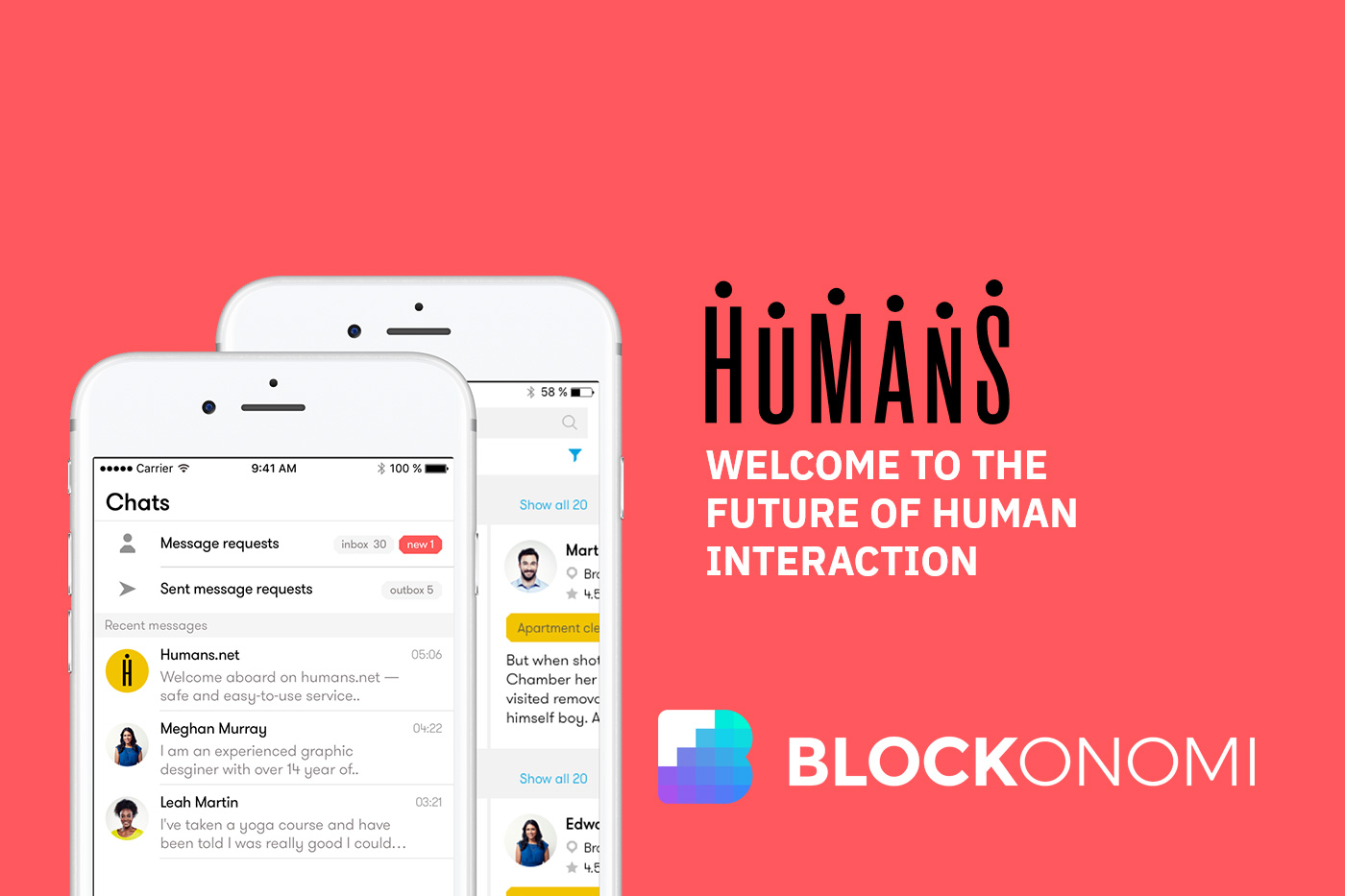 What Exactly Is HUMANS?

HUMAN’s ultimate vision is to transform today’s platform into the world’s largest fully decentralized peer-to-peer network, enabling more efficient interactions between people and businesses around the world. There are no fees or go-betweens. HUMANS also intends to give back to users, returning a significant portion of its revenue to the active users. This is in sharp contrast to other peer-to-peer platforms that take a huge cut of the profits for themselves or large companies that sell user data without offering anything to users.

The HUMANS platform was created in 2017. It already helps connect people worldwide, and thousands of active users join the platform weekly. 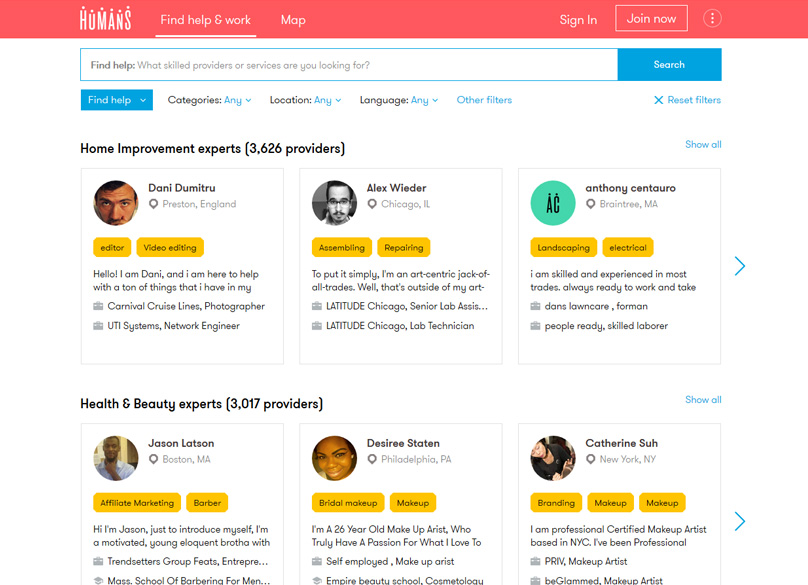 The next-gen open platform from HUMANS will be further developed and allow third-party businesses, individuals, and service providers leverage the HOME (HUMANS open multifeatured ecosystem), which is rapidly developing. This will be a rewarding form of structural disruption.

HUMANS GEN will be the cryptocurrency of HUMANS. It will let users conveniently and securely make payments in the platform without any transaction fees, enhancing the daily lives of users. HUMANS will make money from advertising courtesy of real users’ activity, so the platform returns the favor by letting users earn rewards, as well.

To achieve that goal, the registered users who transact on the HUMANS Platform using HUMANS GEN and consume the advertisements can earn monthly rewards payments. Every month, 25 percent of the platform’s total revenue will go into the Incentive Payment Reserve, which will be then distributed among the active users. 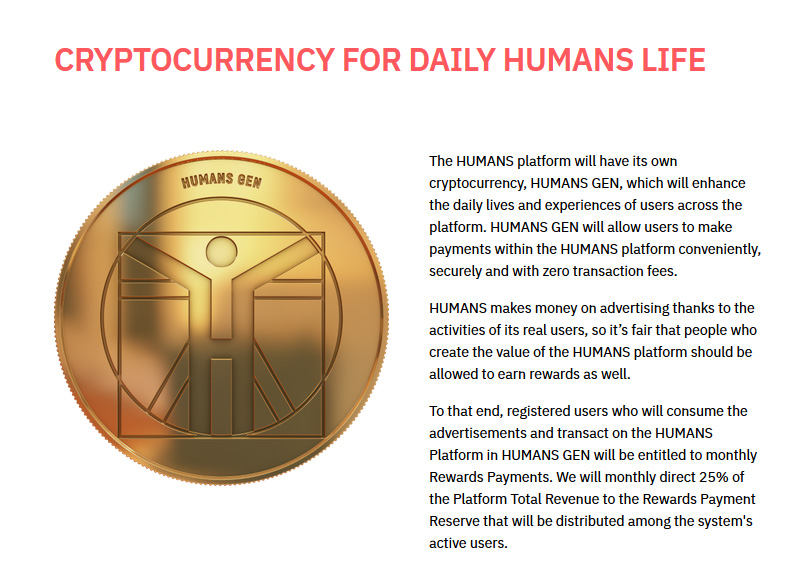 Of this, 40 percent will go to users who consume advertisements. Then, 10 percent of it will go to users who supply tech capacity to support the functionality of HUMANS GEN. The remaining 50 percent will be distributed among active token holders and service providers. There are also interactions between those two final groups, with active token holders conducting transactions where they pay service providers in HUMANS GEN tokens.

It is important to note that instead of limiting the use of various payment methods, HUMANS will incentivize the use of HUMANS GEN as the main payment instrument. With HUMANS GEN, registered users can also receive extra services via the platform, such as peer-to-peer advertising.

The HUMANS GEN token sale began on Nov. 15, 2018, for accredited investors. During this stage, it is sold through Simple Agreement for Future Tokens (SAFT). Investors who are eligible receive a 50 percent bonus when buying the HUMANS GEN tokens. There will also be a 25 percent bonus for early platform registrants of the public sale. To receive this bonus, you will need to receive one of the limited number of coupons. 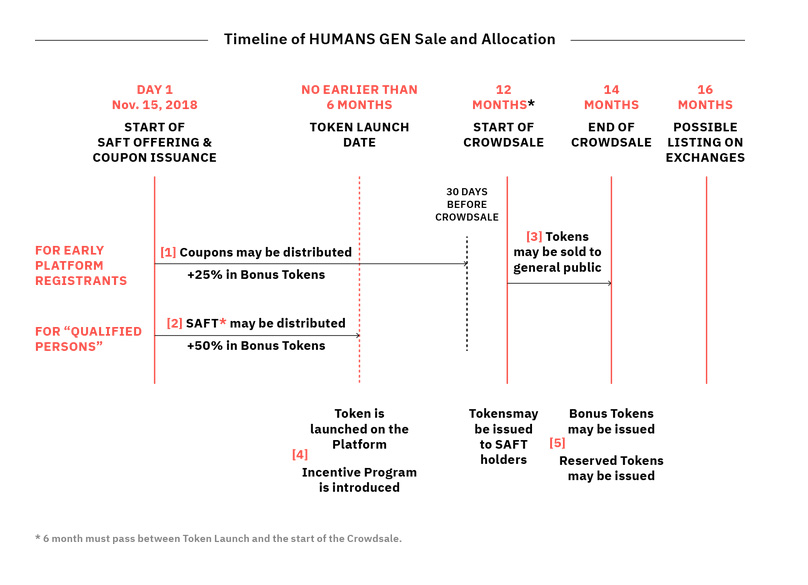 The token price is set to 1 USD per token. During the sale, you can use Bitcoin, Ether, or a fiat currency. The sale has a hard cap of $100 million USD.

Thirty days before the crowd sale, the distribution of coupons will end. At the start of the crowd sale, SAFT holders may receive their tokens. There will then be a two-month period where tokens are sold to the general public.

Looking at the roadmap, the inception of HUMANS took place between Q3 2016 and Q4 2017. During this period, the platform officially launched in NYC and there were 50,000 registered users on the platform. Q1 2018 saw the launch of the HUMANS Interactive Matching System. This quarter also saw the global launch of the platform and major updates, including HUMANS Chat and HUMANS Search. In Q3, the platform launched apps for Android and iOS and more than $10 million USD was attracted and invested in the platform development. To date, the total number of users registered in the platform exceeds the 200,000 mark, and some of the global companies like National Newspaper Publishers Association, FreshTunes, and Coffeemania/L’adresse use the service for hiring employees or allowing their communities leverage the platform’s benefits.

In Q2 2019, the HUMANS GEN token will launch, as will HUMANS Data, which is decentralized storage of people’s personal information on the blockchain. The first Incentive Payment Reserve will take place in Q3 2019. Q4 will have major platform updates, including the first release of the HUMANS Wallet and AI-based assistant, and the start of the public crowd sale. This is also when the platform is expected to reach 1 million active users. 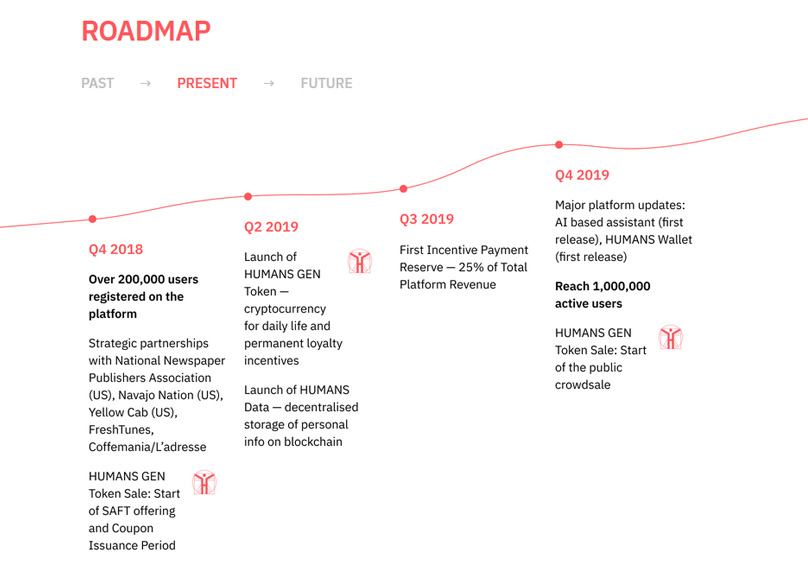 Moving ahead, Q1 of 2020 will see the launch of the HUMANS Decentralized Reputation System, Q2 will see many platform updates, Q3 will include the development of the HUMANS HOME (HUMANS Open Multi-featured Ecosystem), and Q4 will allow for DNA signatures.

Humans is a peer-to-peer network allows users to provide services and products to others in an intuitive manner. The platform is already functional, and the project will work toward full decentralization and adding other AI and blockchain-based features.