From last Friday when the evaluation of the cryptocurrency market capitalization was at around $104,041,000,000 which is the lowest it has been since the start of the year, we have seen an increase fo about 9 billion dollars measured to the current levels.

Looking at the global chart you can see that the evaluation has started forming an ascending channel from Friday’s low and since it is currently on its support levels we are likely going to see an increase to its resistance levels again. This ascending channel is an indication that sellers are starting to wait, and since they have been waiting, buyers are slowly buying. 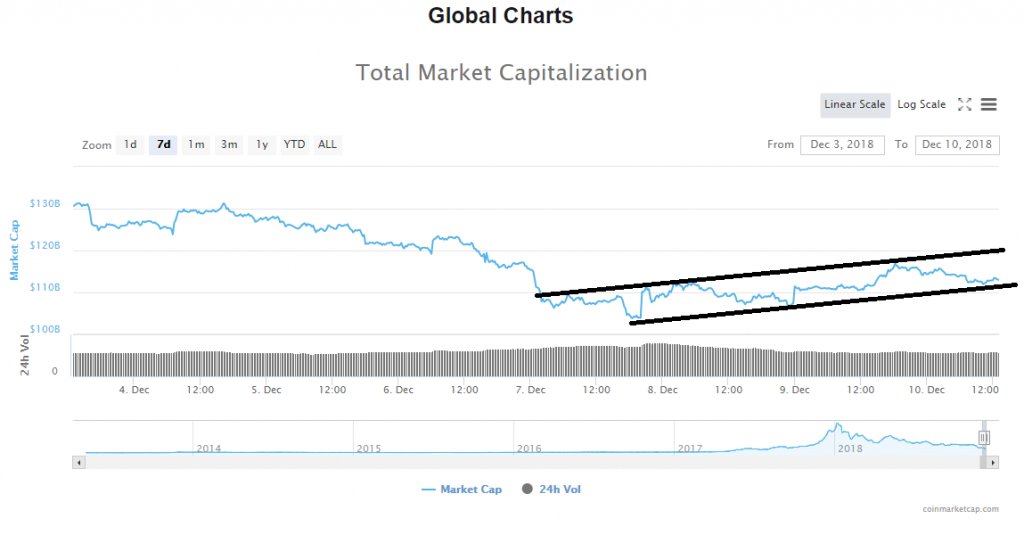 Consequently, the market is showing mixed colors as the evaluation has been bouncing back an forth. The average percentage of change in the last 24 hours among top 100 coins is relatively small and is ranging from 1.4-2.8%.

Bitcoin’s dominance is up to 55% and its evaluation has started another uptrend after some period of being stuck around 52-3% area. 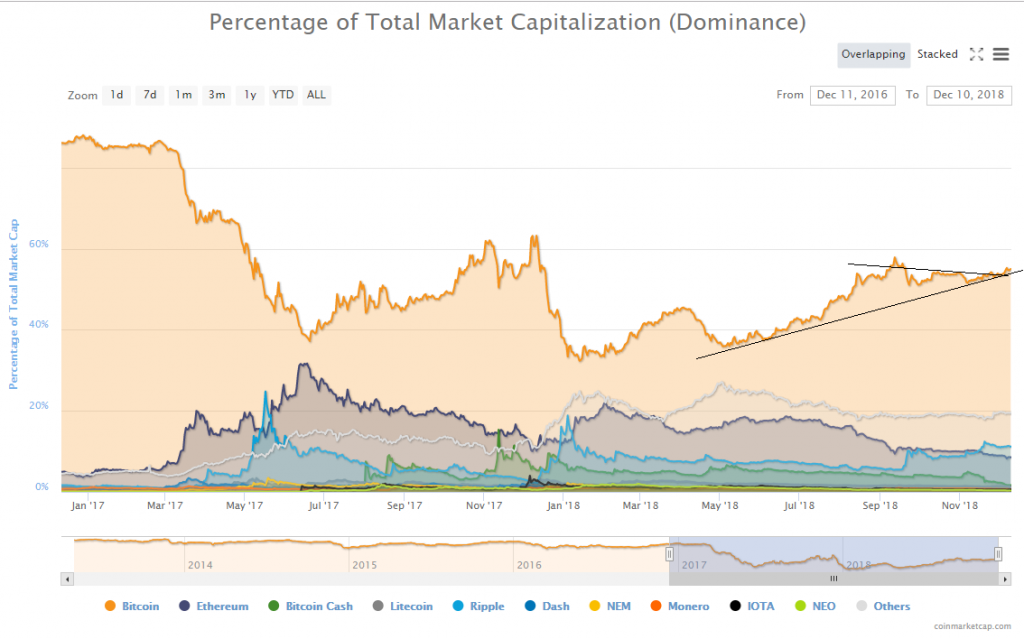 As you can see the evaluation of the Bitcoin’s dominance has broken out from the major triangle in which it was and has continued its uptrend trajectory.

From Friday’s low at $3301 the price of Bitcoin has increased by 7.71% measured to the current level on which the crypto is being traded which is at $3561. 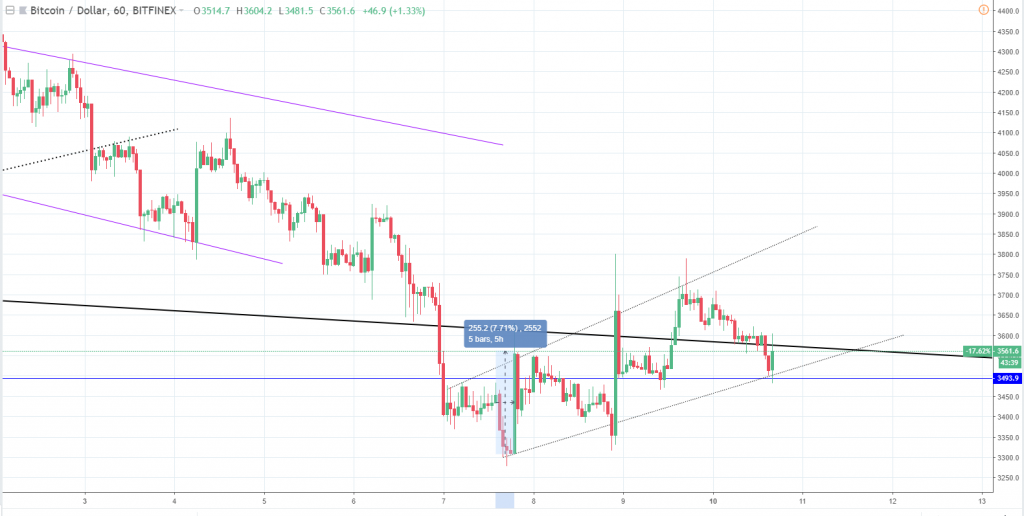 Looking at the hourly chart, you can see that the price has created an ascending channel from Friday’s low until now as the price of Bitcoin has interacted with the support line from the channel for the third time and found support there where the horizontal support level at $3493.9 is, as you can see by the current green candle. This makes this channel a confirmed one and judging by the pattern we are now going to see an interaction with the resistance line again.

This may be difficult as the price looks like it encountered resistance at the baseline support 2 from which the breakout previously occurred and now serves as strong resistance. The price went above it but quickly came down to establish support and is now likely heading upward.

Zooming out on to the 4- hour chart you can see my the previous structure which I am referencing for similarity. 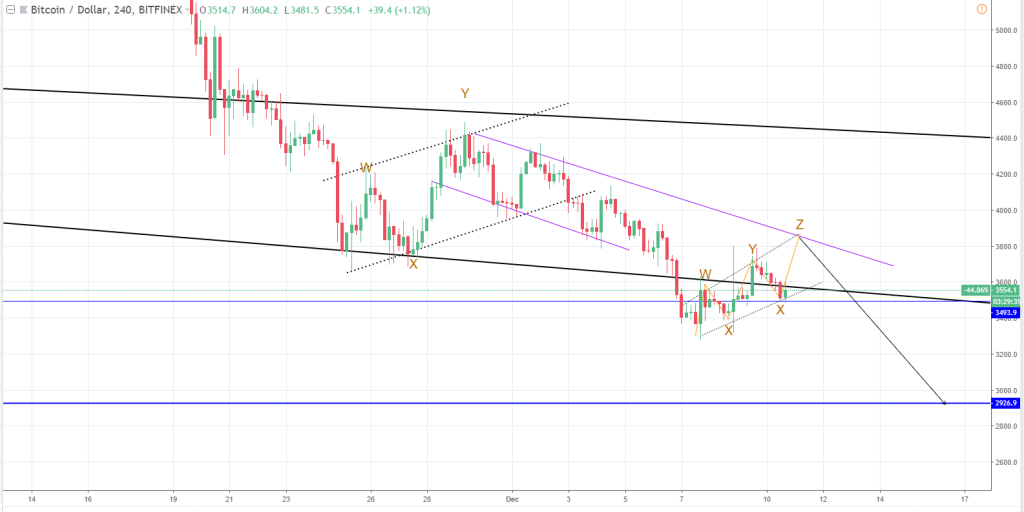 Looking at my Elliott Wave count you can see that it matches what has previously been said a minor increase to around the levels of $3874 would be expected after which more downside for the price of Bitcoin. If this scenario is in play than the price would land on the $2926 which is the most significant support level so far.

Zooming out to the daily chart you can see the significance behind it.

This horizontal level is the major resistance in the past and when it was broken the price caught a strong momentum to the upside. When the price reached $54995 a retracement occurred back to the horizontal level for the retest of support, and since the support was found the price continued in an exponential increase. This is why I believe that another low is coming before we might see some recovery as the momentum behind the sell-off is strong which is why strong support is needed.

If the price does go to slightly below $3000 and finds support there, that would be a decrease of 54% in one go measured from the breakout of the descending triangle when the price was at around $6500.

Bitcoin’s technical indicators are signaling a sell on every time frame.

The overall sentiment for the price of Bitcoin and the whole market, in general, is still very bearish with an indication that new lows should be expected, but since the market decreased a lot and the minor downtrend is lasting for 27 day’s low, we are soon going to see a recovery, so it is highly likely that after the next low a recovery will begin. This recovery could even spark the end of the bear market as the cryptocurrency market has been drained in the evaluation.

The other scenario is that from here we just see another large decrease that will cause further capitulation, but this we are yet to see.