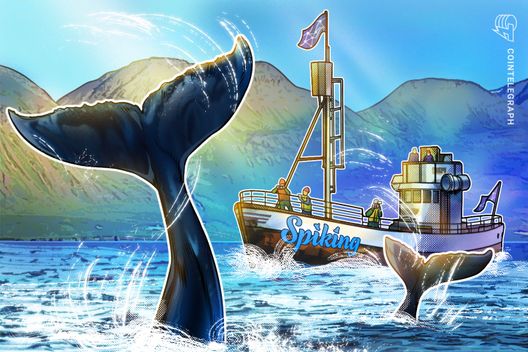 A new crypto platform is offering “the power of 1,000 whales” to inexperienced traders — allowing them to copy trades made by the market’s movers and shakers.

A new crypto trading platform is enabling users to emulate key influencers in the marketplace through a service it says is akin to having “the power of 1,000 whales in your wallet.”

Spiking describes itself as the “world’s first blockchain asset validation and AI-driven crypto trading infrastructure.” Through its platform, users can automatically follow the trades of whales who meet their goals, with “whales” defined as traders who hold large amounts of cryptocurrency — not to mention their ability to influence short-term trends in the market based on whether they buy or sell assets.

Describing why keeping a close eye on whale activity can be a good thing, the startup explains: “They tend to be more sophisticated investors, and therefore have a deeper understanding of the market, knowing when to make moves in order to generate profits with the least amount of risk.”

The company argues that its service is required to fill a void that exists in the marketplace today, as monitoring whale trades provides a “valuable barometer” of where the economy might be heading.

A whale of a time

Spiking has created a “follower-whale” model which is designed to be beneficial for all parties — incentivizing larger traders to share their intelligence with fledgling investors. Through this model, followers use SPIKE tokens in order to copy trades, with the whale receiving a share of any profits they generate as a result. According to the startup, the benefits of this go beyond financial gain, as whales receive social influence while followers begin to feel more empowered.

As well as day-to-day trading and investing, the company aims to help inexperienced traders learn more about the markets in the hope that they too will become whales one day. This is achieved through Spiking’s “Certified Smart Trader” program. Over time, it is hoped that information asymmetry in the marketplace will begin to narrow — reducing the amount of buy or sell decisions that can be attributed to fear of missing out (FOMO) or fear, uncertainty and doubt (FUD).

The startup believes that there is a lot of work to do before the public is better educated on crypto and the opportunities it provides — a problem compounded by the fact that many tech companies banned ads from this industry in 2018. Spiking cites research from PwC in 2015, which revealed that just six percent of respondents to its survey were either “very” or “extremely” familiar with cryptocurrencies.

Since Spiking launched as a fintech company in 2016, the startup says it has attracted support from Singapore’s National Research Foundation, which is under the prime minister’s office. A year later, it was crowned one of Singapore’s hottest startups for 2017.

Looking ahead to 2019, the startup plans to launch its decentralized SPIKE Protocol across multiple exchanges and on a blockchain in an external environment. By the middle of 2019, this will be followed by the first version of its commercial product going live.

Spiking was co-founded by Clemen Chiang, described as an “avid investor in the stock market” for more than 15 years, and Nicole Yee, who formerly served as the chief executive officer of CozyCot.

Spiking’s official app is now available on Apple’s App Store and Google Play, and the first phase of its token sale began on Dec. 12. The company says that Spiking’s Initial Token Offering had sold out during the public sale within three hours.

It follows the successful launch of “Singapore’s first” stock tracking app that enables retail investors to track the trades of key shareholders of public companies listed in six stock markets.