Yesterday, the evaluation of the cryptocurrency market cap has reached $181B at its highest point. As the high was made the evaluation started decreasing until today when it came down to  $177,496,000,000 which is the daily low.

From there another minor increase has been made but only to $179,543,331,062 which was today’s high. Currently, the evaluation is sitting slightly lower but since it is still in an upward trajectory.

Choose the right Broker with our Complete Guide

Looking at the global chart, we can see that the evaluation has interacted with the currently seen ascending channels resistance level where it got rejected again.

Now that the price has fallen to approximately half of the range inside the channel and has started increasing again we are soon to see if a breakout to the upside occurs or would the evaluation pull back to the channels support level or even breakout to the downside. 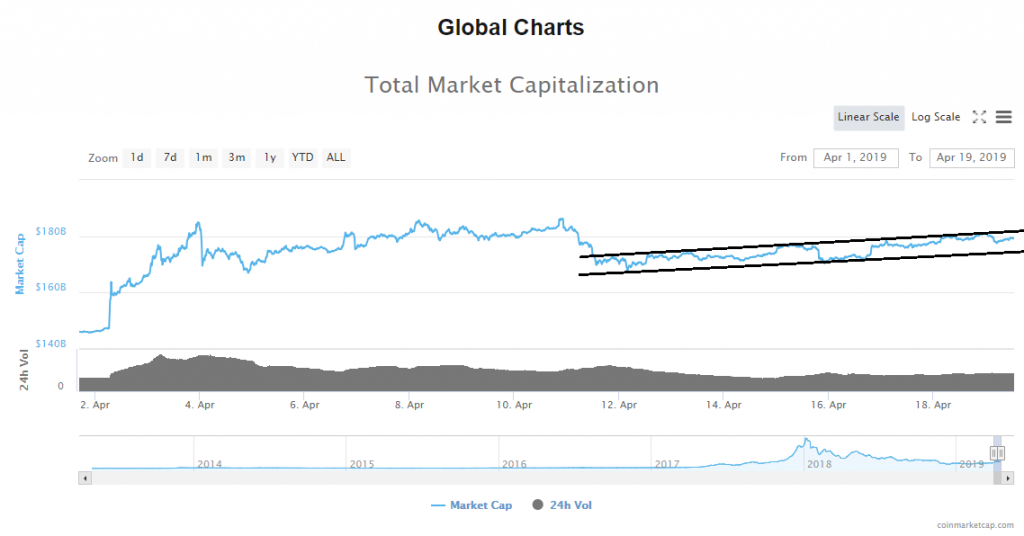 Bitcoin’s market dominance has been decreased slightly and is currently sitting below the 52% mark.

On the hourly chart, we can see that the price found support on the median line of the currently seeing ascending channel which is actually the support level from the higher degree one and serves as a significant support point.

The price action has still been bouncing inside the ascending channel which was formed on the 12th of April when the price of Bitcoin dropped by over 9% in one go after which a three wave ABC to the upside developed and then another sharp decrease.

This movement could have been the third ABC correction of a lower degree which means that the correction could have ended on 15th of April.

As the price increased in a five-wave manner afterward it could also indicate that the correction is over and that we are seeing the start of the next impulsive wave to the upside out of which the seen five-wave increase from 15th of April would be its first sub-wave.

In order for that to be validated the price cannot go below the $5114 level as it is the territory of the 2nd wave from the last five-wave increase which looks like it ended on a slight higher high as the 5th wave truncation ending diagonal.

Now that the 5th wave ended on the ascending channels resistance level as a rejection a downside movement occurred and from its depth, we are to see in which direction would the next structure lead the price for a breakout.

This whole ascending channel could be corrective in nature as prior to it a sharp decrease has been seen which would mean that another downside movement could occur before it ends. If that happens the price target for the decrease would be to some of the minor horizontal support levels inside the $4800 zone.

Zooming out on to the 4-hour chart, you can see that this correctional structure from 3rd of April is considered to be the 4th wave from the Minute five-wave impulse to the upside which means that after it ends another run-up would be expected but it is still unclear whether or not the correction ended or not.

With the currently seen ascending structure still intact as the price is still inside its territory we could see potentially some upward movement to the higher degree ascending channel’s resistance at around $5562 before a breakout to the downside.

Bitcoin’s hourly chart technical indicators are signaling a buy, with moving averages signaling a strong one.

In the last 24 hours, the price of Bitcoin has interacted with the resistance level of the ascending channel in which it is stuck from 12th of April and failed to break out to the upside.

This failure could result in a breakout to the downside, in which case the price could go down to $4800 level but it could also end as a breakout from the minor ascending channel after which an interaction with the higher degree ascending channels resistance could end as a rejection that is going to set the price for a steeper downside movement to the support zone.

It could very well breakout to the downside on the currently seen downtrend, but in either way when the current correction which started on 3rd of April another increase would be expected to $5806 horizontal level or even higher as the 5th impulse wave to the upside out of the Minute count should develop.

That 5th wave can even go to retest the ultimate pivotal point at around $6250 but strong momentum would be needed for the price to continue moving above that level and considering that the price has recovered by almost 60% and that the majority of the momentum ended I don’t believe that we are to see the price of Bitcoin higher than that.

The post Bitcoin Price BTC/USD Analysis: After Rejection at Minor Resistance, What Next? appeared first on Blockonomi.

« Blockchain Platform Believes It Is the ‘Golden Ticket’ for Saving the Live Events Industry
How blockchain innovates democracy with Democracy.Earth »