Yesterday, the evaluation of the cryptocurrency market cap has increased to its key resistance level from the current range as it came up to around $185B at its highest point and even peaked to around $185,443,000,000.

The resistance there was clearly stronger than the upward momentum which is why the interaction ended as a rejection which prolled the evaluation in a downward trajectory and is currently sitting at $177,084,543,495.

On the global chart, we can see that the evaluation is still inside the territory of the corrective structure and is now likely headed toward some of its support levels as it is in a lookout for support. 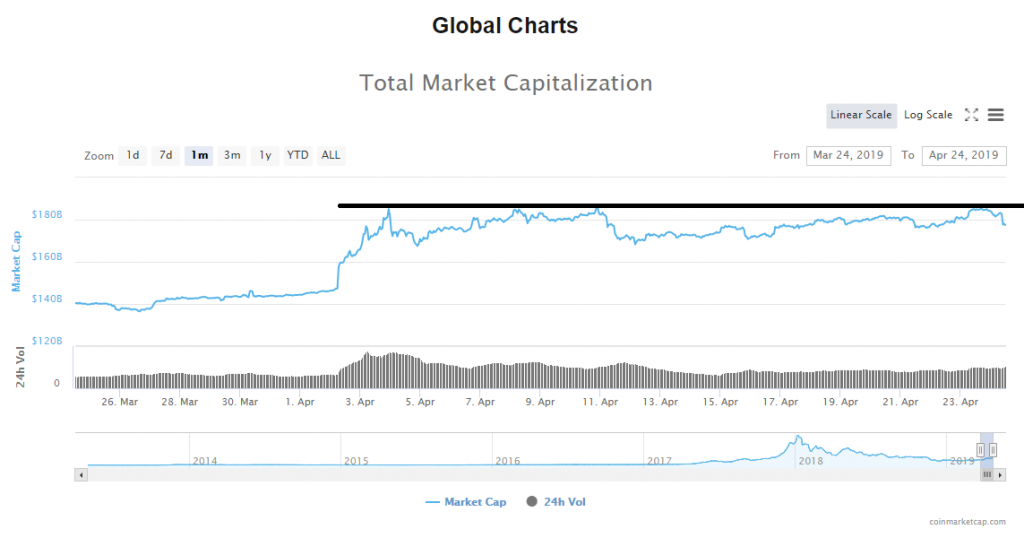 Some temporary support has been found at the current levels but further downside movement could be expected from here potentially to around $170B area where the lower horizontal support of the current range is. 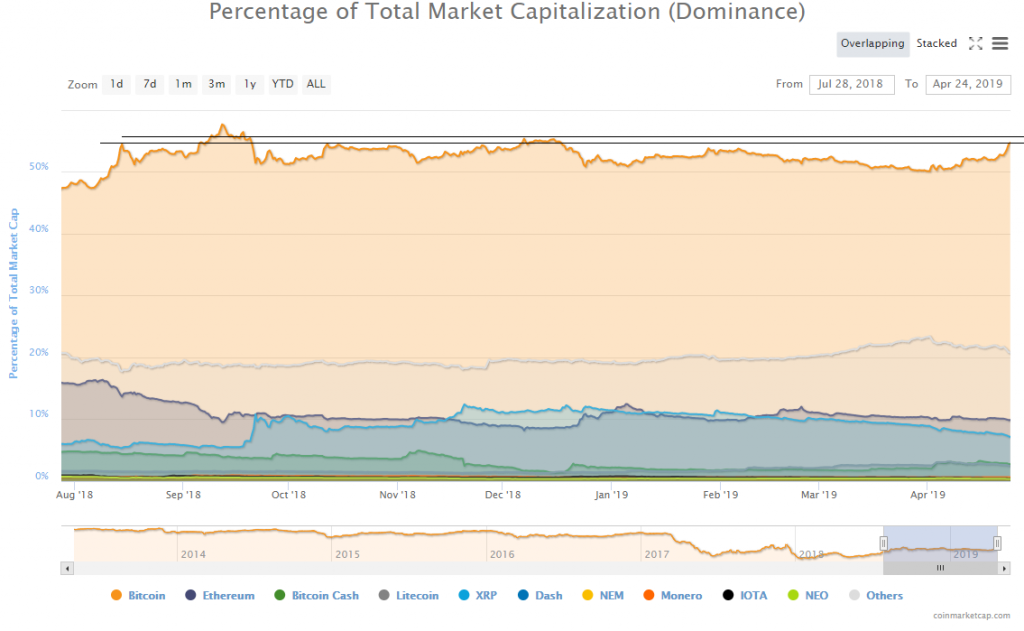 On the Bitcoin’s market dominance evaluation chart we can see that it too is starting to reach its key horizontal resistance level from the horizontal range in which it is stuck from August last year.

There is still more room to the upside before the upper levels of the range are to be met but we could again be seeing the start of a breakout to the upside to my long projected level at around 68%.

From yesterday’s high at $5646 the price of Bitcoin came down by 3.68% to its lowest point today at $5438.3 and even spiked further down in short period leaving a wick on the hourly chart. The price is currently being traded at $5494.1.

On the hourly chart, we can see that the price found some temporary support around the vicinity of the second wave out of the previous correction but is likely headed further down if we are seeing the development of the 5th Minute wave to the upside which I believe it’s likely.

The price of Bitcoin has most likely ended its correction as a five-wave WXYXZ which was the 4th wave of the higher degree impulse wave to the upside.

As the price got rejected by the resistance found the level might get confirmed but further price action development is needed before a strong confirmation can be made in particular meaning that the next movement to the upside which would be the 5th wave out of the Minuette count shouldn’t exceed it as well.

Bullish momentum has been stopped out and the price is still inside the territory of the ascending range which could mean that we are still seeing the development of the same correctional structure labeled as the 4th impulse wave of the Minute count.

But as the price made a higher high and another one is expected we are soon to reassure the validity of the assumption. If we are seeing the development of the 5th impulse wave then the price cannot fall below the purple interrupted line at $5360 which is presumed to be the ending point of the 1st wave end the beginning point of the 2nd wave’s territory which the price according to the EW territory cannot enter on the 4th wave.

The 5th wave could develop higher than projected potentially reaching the significant horizontal resistance at $5806.

Zooming out on to the 4-hour chart you can see that if the price continues for another higher high and we do see the five-wave impulse develop as the 5th wave of the Minute count, it would be the 3rd wave of the higher degree Minor count which means that a 4th wave correction is to start developing after.

This five-wave move that dates from 8th of February is the Y wave from the WXY correction to the upside according to my count so after it ends a trend continuation to the downside would be expected with new lows ahead, but if the price continues moving above the horizontal significant level at around $6250 the count would start to get invalidated.

Before that, we are most likely to see some downside movement either as the now presumed 4th wave or some kind of a downtrend altogether the end of the currently seen increase was the end of the upswing from 8th of February.

Bitcoin is in the sell zone, as indicated by the hourly chart technical indicators.

The market reached its key horizontal resistance level at around $185B level and as the resistance was stronger then the upward momentum, the interaction ended as a rejection causing another slump.

This decrease may be reactionary in which case another increase would occur as the buyers haven’t been overruled, or it could be that the sellers have started to take control of the market in which case further downside is to occur.

Bitcoin’s market dominance is over 54% is showing that some temporary support is found and that another increase is to be expected but that will prove to be a wrong assumption if the price falls below $5360 level.

In either way since the price of Bitcoin is also inside its corrective range and has gotten rejected by its resistance, another expected increase to $5806 might be the last before we see a correction of a higher degree.