Looking at the global chart you can see that the evaluation moved fast to the downside as the majority of the decrease was made in a matter of hours. The evaluation fell below its horizontal support level at around $175B but is looking like it found some temporary support as a bounce has been made. 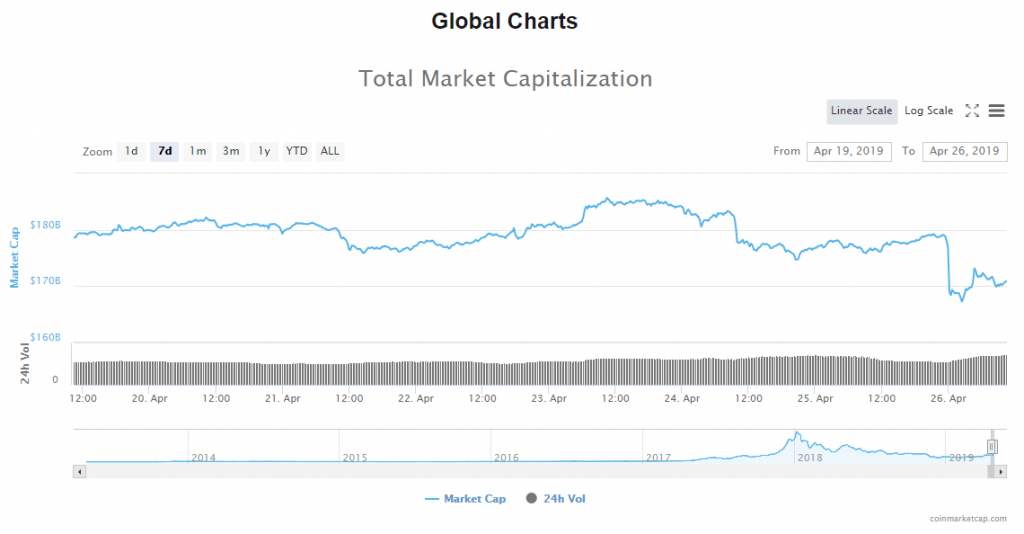 From yesterday’s high at $5536 the price of Bitcoin has come down by 8.65% measured to the lowest point the price has been on today’s open which is at $5058.5. The price managed to recover quickly and spiked back above the minor horizontal support level at around $5375 which is currently being retested for support.

We are currently seeing the attempt for recovery and as the price is currently retesting the minor horizontal support level from the upside we are soon to see if it will hold or not.

Previous to the downfall the 5th wave out of the Minute count has ended which is why this kind of downfall was expected to develop but it might only be the beginning of a higher degree move to the downside as the price increase ended on the significant ascending resistance levels. The yesterday’s high was a retest of the horizontal resistance at $5562 which ended as a rejection which propelled the price to move in a downward trajectory.

As the price is still inside the territory of the ascending channel it is still unclear whether or not this decrease could be the start of the higher degree correction to the downside so if the price continues moving to the downside after we have seen a corrective spike to the upside I could mean that the next move is developing which is set to push the price below the significant support for a breakout to the downside.

Zooming out on to the 4-hour chart you can see that now as the 5th wave from the Minute count ended I would be expecting a downtrend which could be the 4th wave out of the higher degree impulse as we have seen the completion of the 3rd. I am still considering the move from the 15th of December to be correctional as is labeled as the Intermediate WXY out of which the Y wave is in development.

If this is true the price is to now complete a five-wave move to the upside from the Minor count which is set to retest the broken key horizontal support level at around $6250 before the end of the bullish upswing or could end slightly lower to somewhere around the lower horizontal level at $5806, but before that a retracement down to the broken key resistance level at around $4300 looks highly likely and according to the EW theory highly probable as the 4th wave could interact with the 1st wave’s ending point.

I don’t believe that the price is headed that low for the 4th wave as it is more likely to end as another interaction with the lower ascending trendline which is the support level from the still unconfirmed ascending channel that was formed by the structure from 15th of December and in particular regarding the support level from 8th of February when it was first established. This would lead the price to around $4600 area before another higher high can be made.

The other possibility would be that the 4th wave of the Minor count that is expected to lead the price for a breakout from the ascending channel of a lower degree was actually the corrective structure seen from 3rd of April. In that case, the price could continue moving to the upside from the current levels and in particular considering that the price bounced from its support level again. The sub-waves imply otherwise but this possibility is still valid.

The price of Bitcoin has experienced a sharp decline of over 8% in a matter of hours which could be an early indication that the expected retracement has started.

This is still not validated since the price is still inside the territory of its current ascending structure whose support got retested on today’s open.