Over the weekend the evaluation of the cryptocurrency market cap has been hovering around the $171B level.

Today it started moving to the downside again but hasn’t broken the Friday’s low level as it came down to $167,563,671,307 before the move has reversed.

Read: Comparison of the Top Brokers

Looking at the hourly chart we can see that the evaluation is still in the horizontal range from Friday which was made after a sharp decrease from around $179B level has been made in a matter of hours.

This is why we could interpret the stagnation as a consolidative range which is set to bring the buyers and the sellers closer to consensus. As the evaluation is in a downtrend this is most likely to end as a breakout to the downside with further decrease ahead. 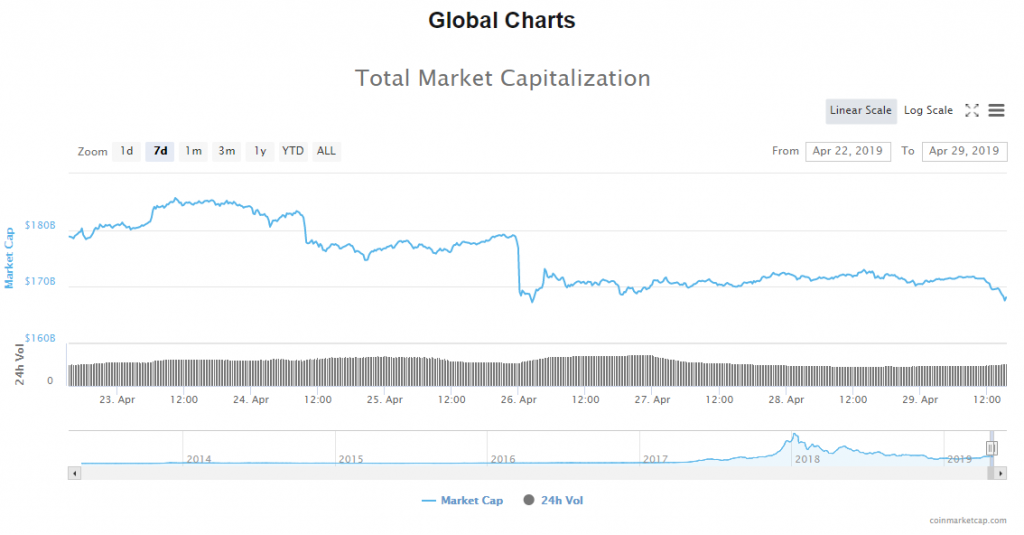 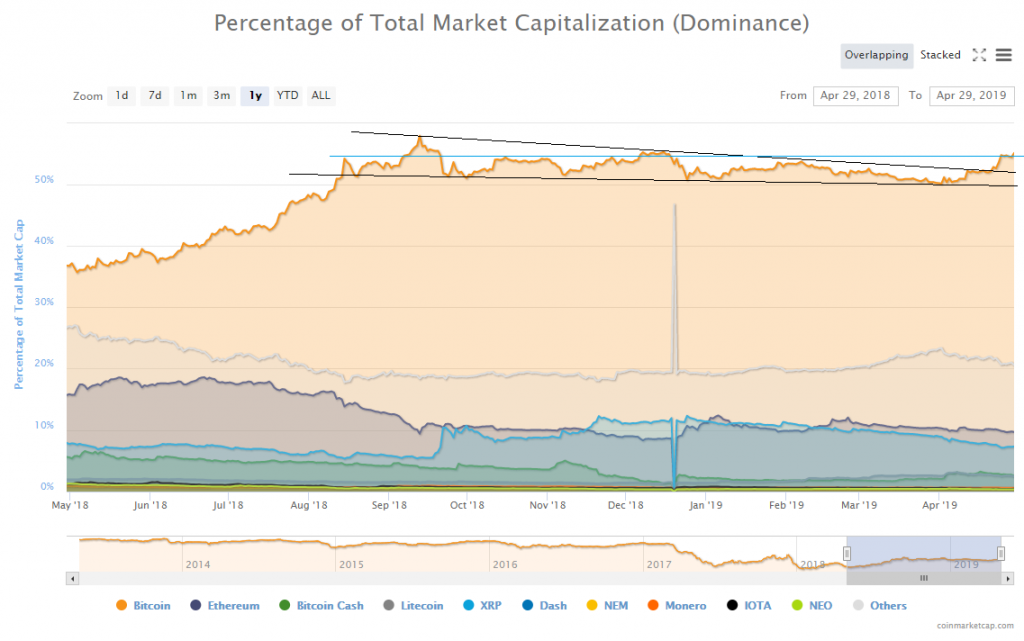 On the Bitcoin’s market dominance chart, you can see that the evaluation broke out from the descending triangle and came above the horizontal resistance level of the prior high. As it is currently being retested from the upside further continuation would be expected at least to 55.2% level which correlates inversely with the expected decrease in the market cap.

Since then the price has been in a minor downtrend and has led the price to spike slightly below the $5400 level around which the price is currently being traded.

On the hourly chart, we can see that the price of Bitcoin fell to the significant ascending support level on Friday’s low where it found support, as the price came spiking to the upside after the interaction has been made.

The price increased in a three-wave manner to the upside until it came up to the horizontal resistance level at around $5562 where it found resistance and started moving to the downside.

The price action is forming another minor descending expanding triangle which could be the fractal of the previous higher one made by the corrective structure labeled as the first ABC after the impulsive 5th wave ended. As after Friday’s low which was the ending point of the first ABC we have seen a three-wave move it could be the second ABC correction to the upside from out of the higher degree three-wave correction.

This means that now seen expanding triangle could be the starting structure of the third ABC correction and considering the fractality it looks likely.

If this is true, then we are going to see another interaction with the resistance level of the expanding triangle around the $5460-5470 level which is also a minor horizontal significant level before another move to the downside which would be likely to end on the significant ascending trendline – the support level from the ascending channel of a higher degree. As the price is still inside its territory we might be seeing the start of a breakout to the downside which we are going to see from the expected interaction with the ascending trendline.

Over the weekend the cryptocurrency market has been moving sideways and was mostly hovering around $171B level but today another minor downfall was made close to the levels of the Friday’s low.

This stagnation might be interpreted as consolidation that was made after the previous market slump which is why another move the downside is likely.

Bitcoin’s price chart is also showing bearish signs as the price recovered from Friday’s low but failed to surpass the resistance found at around $5562 level which caused another downturn as the price fell to $5370 at its lowest point today.

The price is still inside the territory of the ascending channel made by the price action from 3rd of April so now that the price is in a downward trajectory an interaction with its support level would be expected which would bring the price down to $5260.

The post Market Stagnates Over Weekend: Is this the Calm before the Storm? (BTC Price Analysis) appeared first on Blockonomi.