From yesterday’s low at $167.563,671,307 the evaluation of the cryptocurrency market has increased and is currently sitting over $171B level.

This increase was expected as the evaluation retested the vicinity of the last Friday’s low and was the key horizontal support level from the currently seen horizontal range in which the evaluation has been moving sideways.

On the hourly chart, you can see that the evaluation came above the median point of the range and is in an upward trajectory headed towards its resistance at around $173B. 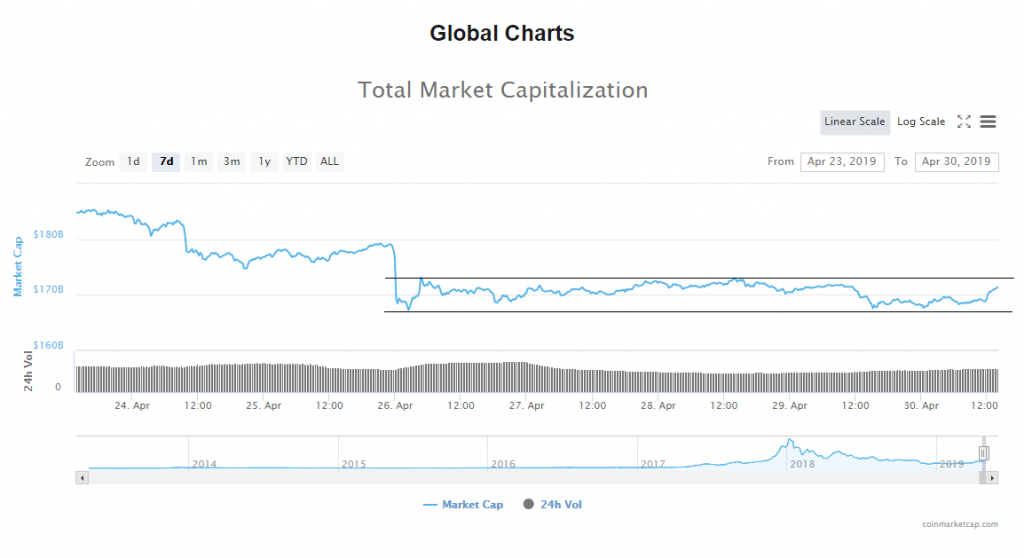 From yesterday’s low at $5393.9 the price of Bitcoin has increased by 2.41% measured to today’s high at $5523.6. The price is currently slightly lower as strong resistance has been found around the current levels.

On the 15-min chart, you can see that the price action formed an expanding triangle from Sunday until today as the attempt for a breakout to the upside is currently being made.

The price looks like it found some strong resistance as indicated by the last 15-min candles which is why now we are going to see if the trend turns and we see a fakeout or would a proper breakout occur.

As Wednesday’s high was most likely the 5th wave out of the five-wave impulse to the upside we could be seeing the correction of a higher degree starting to develop in which case the two outlines structures would be its two sub-wave and is why they have been labeled as two ABC corrections.

The weekend’s increase has developed in a three-wave manned and as the price fell below the $5416 level and entered the territory of the B wave it confirmed that we aren’t seeing a five-wave move to the upside developing but that the increase indeed ended as a three-wave correction.

The price is still inside the territory of the ascending channel with whose support level the price interacted on Friday’s low, so we could still be seeing the development of the same correctional structure that started on 3rd of April.

This would mean that the 5th wave hasn’t ended but since I’ve counted five sub-waves I think that it has which is why now I would be expecting a breakout to the downside which would be the 4th wave of the higher degree with another and the final increase expected after.

The first ABC move has also made an expanding triangle from which a breakout to the upside has been made which we are seeing again on a lower degree. This fractal implies that the seen increase is still the part of the same structure and is most likely the continuation of the higher degree correction to the downside which is why after the current increase ends I would be expecting another shart move down as we’ve seen on Friday.

As the price is for now in an upward trajectory and has most likely broken out from the last expanding triangle a continuation to some of the significant resistance levels could be likely which could bring the price of Bitcoin retesting some of the interrupted ascending trendlines around $5720 area.

The price is still inside the territory of the ascending channel made from 3rd of April so no conclusive statements could be made at this point, but as the wave structure looks corrective more than impulsive I believe that we are going to see a breakout to the downside before the price could continue for another and the final increase.

The market has increased slightly like projected yesterday and but none of the significant resistance points haven’t been broken which makes it hard to say if the increase would continue on.

Bitcoin’s price is showing signs of struggle at the current levels and with the market cap evaluation close to its horizontal resistance we are soon to see if the interaction ends as a rejection or would the buyers catch enough momentum for a breakout.

If the price of Bitcoin starts immediately pulling back we are likely to see further downside movement with a potential breakout to the downside from the ascending channel made from 3rd of April but if the price doesn’t fall below $5380 again a bullish outlook would be more likely.