Another round of suspicious activity can currently be seen on the Bitfinex exchange as the news regarding Tether funds seizure by the US Justice Department are starting to emerge.

According to the official indictment document on, the United States Justice District Court, Southern District of New York has charged Reginald Fowler and Ravid Yosef who are linked to operating bank accounts on the behalf of Bitfinex and other crypto exchanges on four charges:

“Reginald Fowler and Ravid Yosef allegedly ran a shadow bank that processed hundreds of millions of dollars of unregulated transactions on behalf of numerous cryptocurrency exchanges.  Their organization allegedly skirted the anti-money laundering safeguards required of licensed institutions that ensure the U.S. financial system is not used for criminal purposes and did so through lies and deceit.  Thanks to the investigative work of the FBI and the IRS-CI, they will be prosecuted for their actions.”

The court ordered the seizure of all the funds generated through such activities and has confirmed that the seizure of the part of the fund’s already occurred from the various branches of the HSBC Bank on the accounts opened by the mentioned individuals. 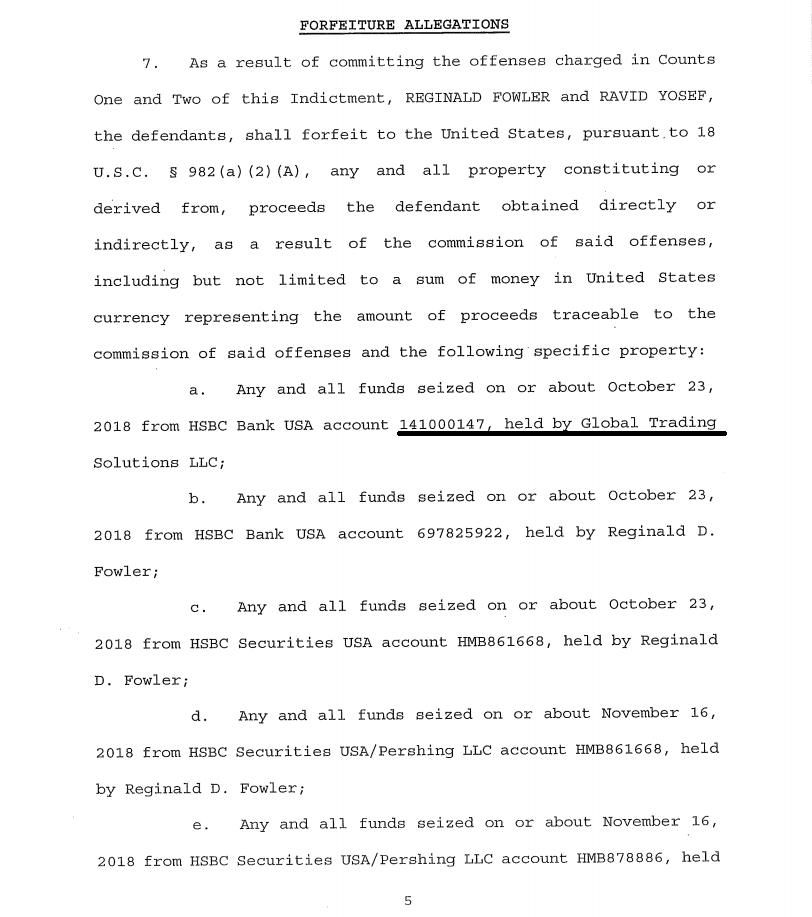 One of those accounts, HSBC Bank USA account 141000147, has been confirmed to be linked to Bitfinex which can also be clearly seen on the tweeted made by Larry Cermak, the Block Managing Editor back in October 2018 which are the instructions given for a wire transfer from Bitfinex. 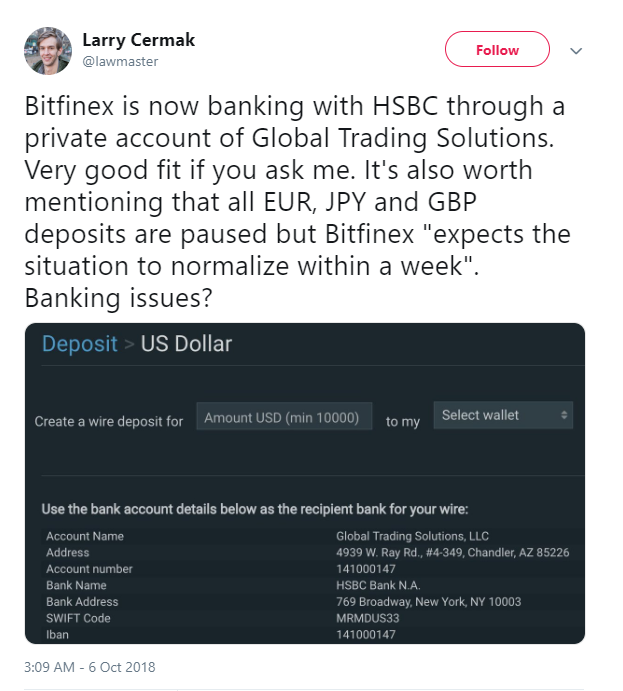 This confirms that at least the part if not the whole sum of the frozen $850.000.000 is actually held by the US Justice Department and that the business won’t continue as usual after fixing “banking issues”.

The news is highly significant and the fact that other cryptocurrency exchanges have also been represented by the mentioned individuals could make a huge impact on the market in the following period, serving as a catalyst for another downturn which has been annunciated by my Elliott Wave count numerous times.

Meanwhile, the evaluation of the cryptocurrency market cap has been on the rise and came up from around $174,8B at yesterday’s open to $187,686,632,477 at its highest point today. 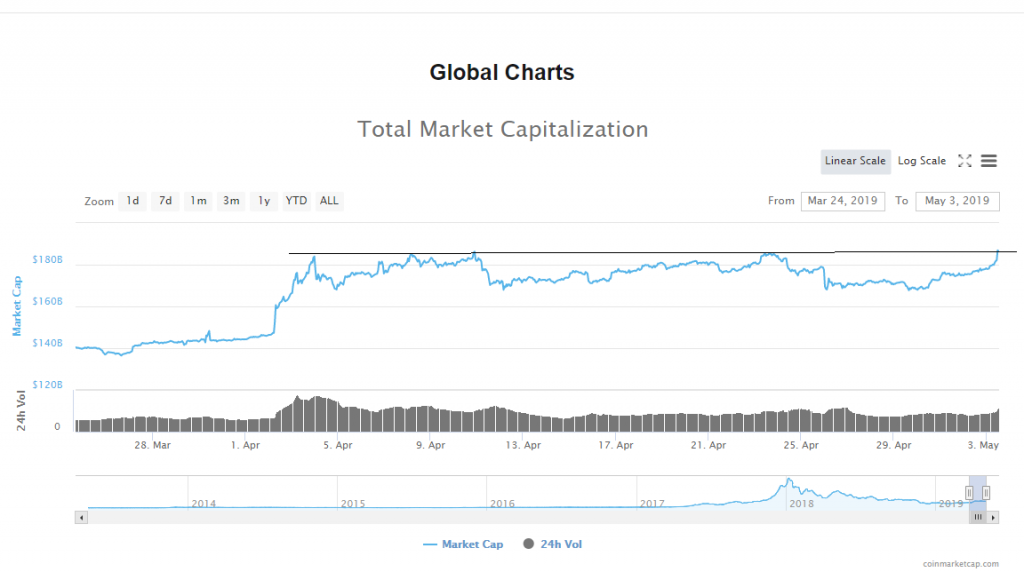 On the global chart, we can see that the evaluation hasn’t broken the significant horizontal resistance level but the interaction has been made with the evaluation making a quick peek above it before falling back.

Bitcoin’s market dominance has also been increasing and came up to 55.5% from yesterday’s low at 54.37%.

The price of Bitcoin keeps increasing on Bitfinex compared to other exchanges and made a 7.59% difference today and came up to $6141 at its highest point today.

It looks like the price broke out from the significant resistance which was offered by the upper ascending trendline of the ascending channel in which the price action was bouncing from 3rd of April and was considered as a corrective structure before the furtehr increase.

I was expecting further movement to the downside before the final increase starts but it appears that the increase seen from last Friday was the beginning of the 5tf wave of the Minor count.

On other major cryptocurrency exchanges, the price came up today at its highest point to $5800-5700 and hasn’t broken the significant ascending resistance level which has been on the Bitfinex chart (which I regularly use).

Considering the news we could clearly link it to this suspicious activity seen on the price charts as Bitfinex’s differs by a significant amount.

Looking back at the Bitfinex 4-hour chart, you can see my Elliott Wave count according to which the structure from 15th of December, when the price of Bitcoin reached $3228 at its lowest, is a WXY correction. This means that after its completion I have been primarily waiting for a trend continuation to the downside but first, the five-wave structure to the upside was to develop.

This type of correction occurred numerous times since the beginning of the bear market which I have outlined in some of my previous posts: 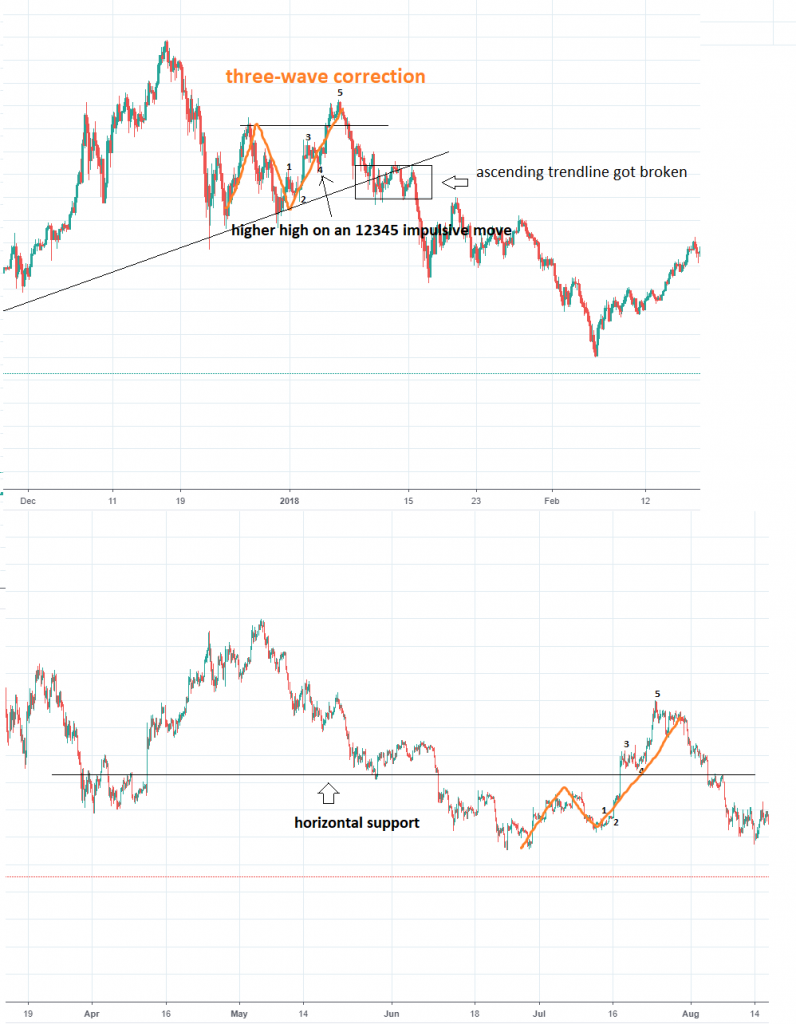 Looking at the daily chart we can see that the price of Bitcoin is close to the $6250 level with which the interaction has been awaited before the end of the 5th wave of the Minor count.

This level is a significant invalidation point of my project scenario in some of my previous posts as it’s considered to be the beginning of the 2nd wave’s territory in which the price cannot enter on the 4th wave whose development I am assuming we are seeing.

Now as the 4th wave ends I would be expecting the 5th wave to the downside to start developing and would lead the price of Bitcoin for further lows below the one at around $3300-3200 area.

The significant news headline regarding the US Justice Department District of New York is likely to serve as a strong catalyst for the expected downturn in the market.

We are yet to see when this news starts really impacting the market as it is only starting to emerge but when it does I would be expecting a lot of panic selling especially of Tether which could temporarily cause the price of Bitcoin to rise exponentially before crashing down hard as investors move from USDT to BTC for fiat money which may already be started on Bitfinex as out of the ordinary activity has been seen on the price charts.