Looking at the global chart, you can see that the evaluation came up to the resistance level of the currently seen range and has got rejected by the level. As this structure looks expanding another movement to the downside to its support level could occur if the attempt for a breakout ended as a rejection.

This also might be a temporary retracement as the resistance has been encountered. 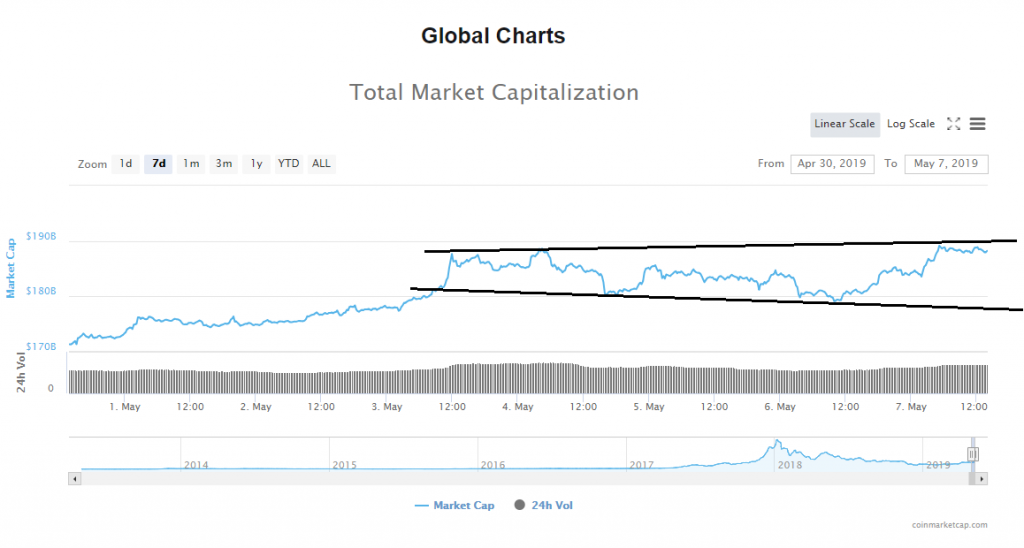 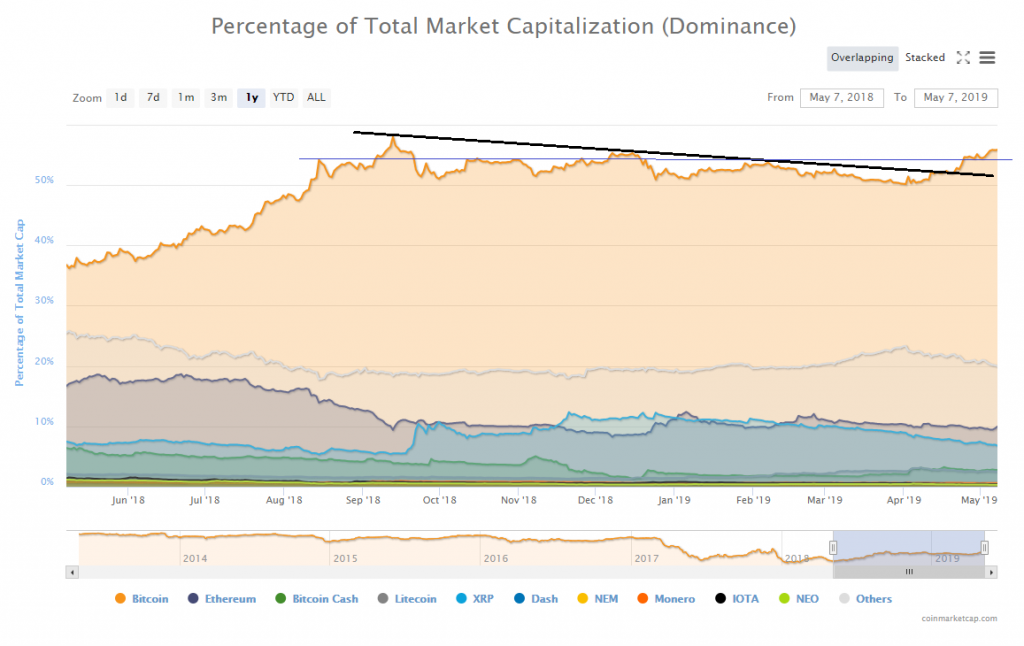 On the Bitcoin’s market dominance chart, you can see that the evaluation previously broke out form the descending trendline and has been on the rise since the start of April and has come above the significant horizontal level which was retested for support and the evaluation continued moving to the upside.

Over the weekend the price of Bitcoin has been moving sideways after increasing by 7.35% on Friday when the price came up from $5721 to $6142 at it’s highest point.

The sideways movement made by the price action formed a symmetrical triangle in which a three-wave correction developed until yesterday when the price came down to $5929 and retested the support level again before starting the next impulsive move to the upside which led the price for a breakout to the upside.

From yesterday’s low $5929 the price of Bitcoin increased by 5.91% today as it came to $6275 at its highest point today. On the 15-min chart, you can see that the resistance found at the significant horizontal level is putting pressure on the price which caused the formation of a cluster around it. If we are seeing another impulsive move the upside this cluster would be its 4th wave which means that another move above the level would be expected.

The resistance found at the current level might be higher than the upward momentum in which case we could see a fast downfall to the broken resistance for a retest of support in which case the price couldn’t exceed the $6095 level if the wave is a five-wave impulse.

Zooming out on to the hourly chart, you can see that the price broke out from the ascending channel in which it was correcting since 3rd of April.

This could be viewed as the 5th wave from the Minor count as the correction inside the ascending channel was the 4th wave which is why we are seeing the next five-wave impulse of the Minute count developing to the upside.

The breakout from the ascending channel and the interaction with the significant horizontal level only occurred on the Bitfinex chart as the price of Bitcoin hasn’t came above $6000 level on other major exchanges.

This may indicate that the increase has ended in which case an immediate rejection will occur, but the cluster which has been formed looks bullish as its putting pressure on the key resistance level.

If the ascending channel was the 4th wave of the Minor count and has ended on Friday 26th low we could be seeing the ending of the first impulse move in which case I would be expecting to see a retracement to around mid-range of the channel according to Coinbase chart and to the broken channel’s resistance according to the Bitfinex chart before a proper breakout can be seen.

The significant horizontal level at around $6250 is the key horizontal support level which got broken in November last year when the price fell from around $6500 to $3230 in one go. It is the key invalidation level for my primary count as well as its the beginning of the territory of the 2nd wave which the price cannot enter on the presumed 4th wave which is developing as the three-wave WXY correction which has been outlined in some of my previous analysis.

As the price on Bitfinex chart came up to the mentioned level and is now forming a cluster around it, but hasn’t done so on the BLX chart (Brave New Coin Liquid Index for Bitcoin) there still hasn’t been any invalidation and the price has further room to the upside before the invalidation could occur and the price would need to stay above the level and not just enter the territory with a spike.

This key resistance interaction would be expected before the end of the WXY correction and is most likely going to serve as a retest of resistance after it got broken as support, so the rejection by the resistance found at those levels could set the price for the expected downturn which would be the trend continuation and the 5th wave for a higher degree count.

The price of Bitcoin still differs on Bitfinex exchange from other major once and which is why on the Bitfinex chart we have seen interaction with the key horizontal resistance level at around $6250 while on Coinbase chart the resistance found is from the ascending channel from got broke in the first case.

In either way the price has interacted with significant resistance level and has formed a cluster which indicates that a decisive move is heading next.

This decisive move might be a strong move to the downside which looks more likely in this time as the resistance found is significant enough, but the buyers could catch more momentum then currently exhibited which may cause a strong breakout to the upside.

The post Bitcoin (BTC) Trading At Key Resistance: Where is it Headed Next? appeared first on Blockonomi.