On the global chart, we can see that the evaluation is currently interacting with the significant horizontal resistance level made by the wave structure from 3rd of April as an attempt has been made yesterday for a breakout to the upside.

The attempt ended as a failure with the evaluation falling back immediately after but another attempt could be made before a proper rejection takes place which could be in play now as the interaction with the significant horizontal resistance is being made. 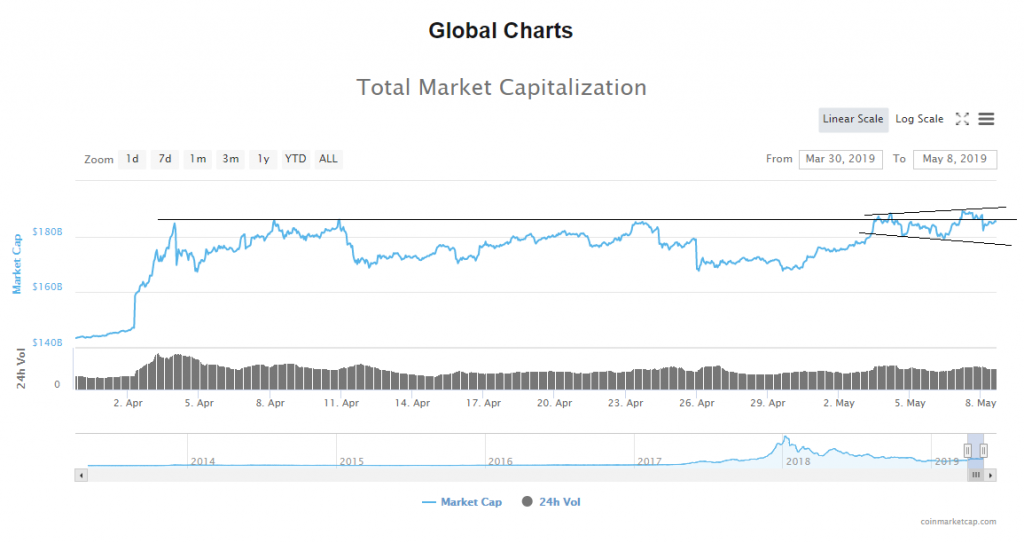 On the Bitcoin’s market dominance chart, you can see that the evaluation has been on the rise from 8th of April when it was sitting at 50.38% at the open and has come up by over 6% measured to today’s high.

Looking at the market cap evaluation chart you can see that in the same period the market moved sideways which indicates that in time of uncertainty people tend to flock to Bitcoin most likely for the fast position liquidation purposes in the times of the declining market.

This again shows why I am viewing this evaluation as a “confidence indicator”, which in this case is showing that market sentiment is starting to get bearish since the 3rd of April when the prices reached their peeks and started ranging sideways or showing declines around 8th of April.

From yesterday’s high at $6288 the price of Bitcoin has decreased by 4.46% today as it fell to $6007 on Bitfinex exchange. Since then a small recovery has been made to around $6158 below which the price is currently being traded.

On the hourly chart, we can see that the price immediately after the interaction with the significant horizontal resistance level at $6265.6 yesterday started falling down with fast momentum which confirmed the significance behind the level and the presence of strong resistance at those levels.

The price fell to below the previously broken minor horizontal resistance made by the two prior highs of the corrective movement but landed on the ascending trendline which again offered support.

As a higher high has been made yesterday and on today’s open another higher low, the price action has started forming an ascending range like the one from which it previously broke out off. This pattern is known as an ending diagonal and occurs only in the wave 5 out of the five-wave impulse. 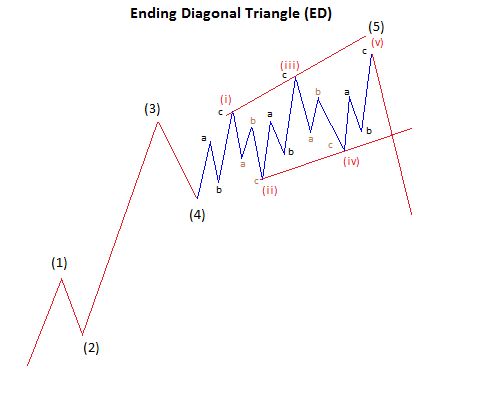 Considering that the sub-wave counted are showing a remarkable resemblance I believe we are seeing the end of the five-wave impulse of the Minute count which is also the last wave from the Minor count. Before the end, we are likely to see another increase as the last ABC correction to the upside should develop and would be the third interaction with the ascending channels resistance level.

If that occurs the price would enter the seller’s territory above the $6256 level for a short period before a downtrend starts.

This final increase could be interpreted as a final attempt for a breakout to the upside above the significant horizontal resistance level at around $6256 so a quick spike above it, entering the seller’s territory would trigger another round of strong selling.

As the bulls would get exhausted, bears would take control for which we are going to look at the $6007 level which is the last price point from which the increase occurred, thus the price going below it would indicate that the bearish sentiment has overruled the market.

Zooming out on to the 4-hour chart you can see that the price is expected to go to the upper horizontal support level from back in November last year which is at around $6400 before the end of the 5th impulse wave.

As above the level is the territory of the 2nd wave of a higher degree the price cannot go higher on the 4th wave in which it is presumably in and is completing an Intermediate WXY correction.

This is why the level serves as my count invalidation point and would be closely monitored, but as I am expecting a downtrend shortly the count would soon get validated.

The expected downtrend would be the 5th wave of the higher degree count and would be a trend continuation after the price came up to the significant broken support for a retest of resistance.

It would be expected to go below the 3rd wave which was the December 15h low when the price was at around $3226. I would be expecting the price of Bitcoin at around $1300-1200 before the end of the bear market but the expected 5th wave from impulse wave to the downside of a Primary count might not be it as we could see further correctional movements before the end of the bear market.

The market has decreased in the last 24 hours but another minor increase would be expected before we enter a bearish period.

As the market confidence diminished, indicated by the Bitcoin’s market dominance chart and the market coming to the key resistance point I believe that we are seeing the final exhaustion before the start of the declining market.

Bitcoin’s price action is showing ending patterns with clear signs of the reversal ahead.

The expected increase would be the final ABC correction to the upside which is set to enter the seller’s territory above $6250 level before an immediate decline to $5806 which would mean that the bears have taken control.

This would be the end of the correction from 15th of December when the price fell to $3226 and the beginning of another move to the downside which is set to push the price below the mentioned level.

The post Crypto Market Update: Bitcoin Price Holds Up, Where Next? appeared first on Blockonomi.