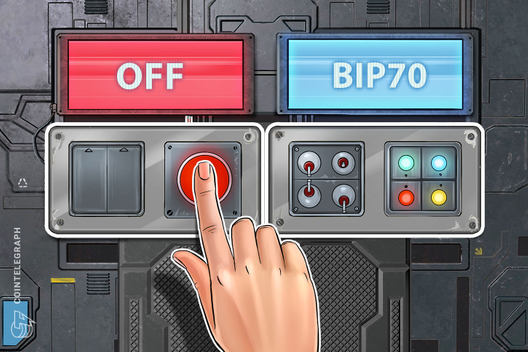 Developers are still keen on removing BIP70 from the Bitcoin Core client altogether, they reveal.

Cryptocurrency payment processor BitPay may soon find it harder to do business as developers plan to remove support for the way it creates payment addresses.

In a GitHub discussion about the future 0.19.0 release of the Bitcoin Core client, developers continued plans to disable BIP70 by default, and possibly remove it altogether in a later version.

The proposal first appeared in March this year, with activity to make it a reality ongoing.

BitPay has stuck to using the payment address format defined in BIP70. Other wallets and payment businesses have joined the majority of Bitcoin users in preferring BIP21, leaving BitPay wallets with little support.

Despite this, the company continues to use the same address format. This led to frustration, as those wanting to pay in Bitcoin often find their wallet does not allow payment of BitPay invoices.

Previously, BitPay allowed the extraction of the destination Bitcoin address from its invoices for those who could not or did not wish to use BIP70. That feature subsequently disappeared.

BIP70 lost favor to BIP21 as its security setup involved reliance on centralized technology markets and paved the way for Anti-Money Laundering and Know Your Customer options to enter Bitcoin merchant transactions.

BitPay: BIP70 against all odds

Previously discussing the possibility of freezing out BitPay, Bitcoin Core developer Luke-jr did not mince his words.

“Do any merchants require BIP70 at this point? (A particular payment processor claims it does, but AFAIK their implementation is broken and already doesn't work with Core.),” he wrote on GitHub in March.

The company has released dedicated posts on BIP70, including one in January 2018 in which it defends its decision to force users to switch wallets solely to pay its invoices.

As Cointelegraph reported, BitPay already faces controversy over its business practices and technical setup, with opponents frequently calling for a boycott.

A dedicated competitor for merchant transactions, BTCPay, has been gaining momentum since 2018, while last week saw the announcement of a Lightning Network-based alternative from Zap wallet.