On today’s hourly chart, the Monero coin is showing a beatable outlook, with negative moves. XMR/USD pair failed to recover from the bearish momentum as it is currently holding strong support below $54.938 and resistance level at $56.199. The market started the sell-offs trading at $55.875, followed by a short-term consolidation phase above $55.860 level. At around 13:00, a bullish accumulative candle was seen that dropped the price to a low of $55.096.

A slow price movement below $55.559 followed that confirmed indecisive market momentum. Besides, this placed the current price at $55.534 that showed an intraday loss of 0.6%. The technical indicators also reflected the downward correction, with the long-term SMA gravitating above the short-term SMA. Additionally, the parabolic SAR is now above the price that indicates a sell signal.  However, the RSI indicator is heading north, suggesting a strong increase in buying interest. 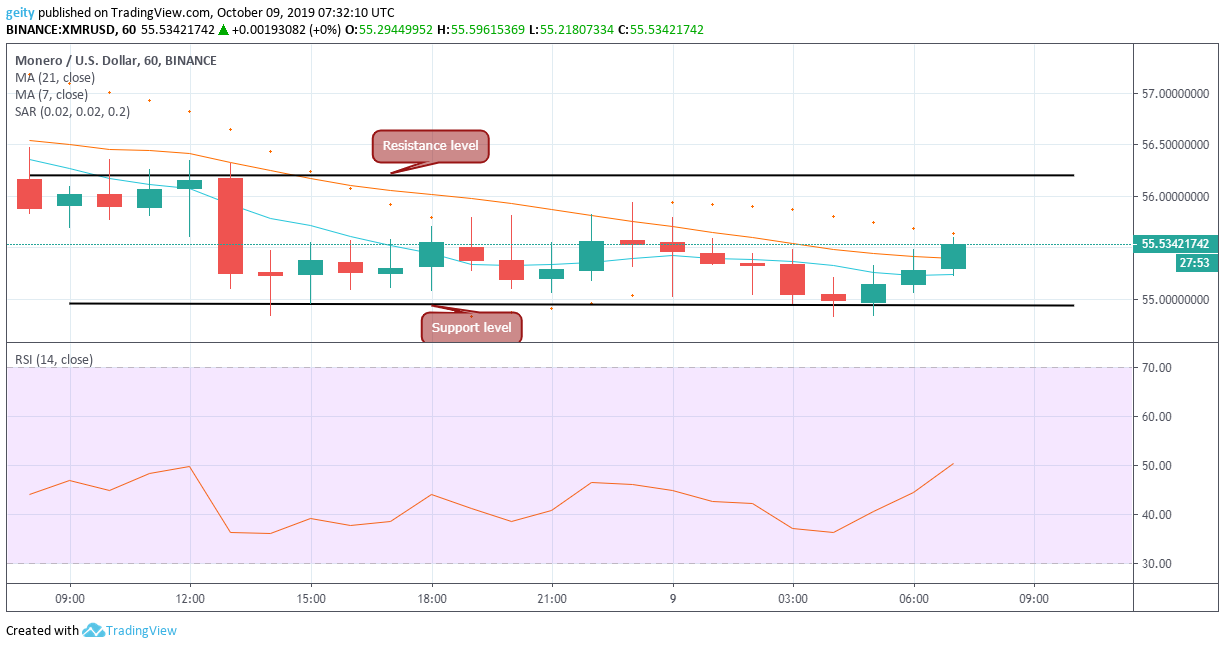 ZEC/USD pair is also on the downside correction below $37.495, having escalated from where it began the sell-offs at $37.087 to currently changing hands at $36.617. Afterward, the market has given positive moves the showed sellers are in control with resistance levels being lowered from $37.495 to $36.617.

The volatility levels was very low that might result in a significant breakout either on the upside in the short-term. The presence of Doji candles was also seen. That confirmed equality and indecisive market momentum. Additionally, the long-term SMA has formed an active bearish trend line above the short-term SMA that gives a negative outlook over the last 24hrs.

However, the RSI and the Parabolic SAR indicators are currently indicating a bullish outlook. With the RSI heading north and the parabolic dots seen below the price that suggests a buy signal. 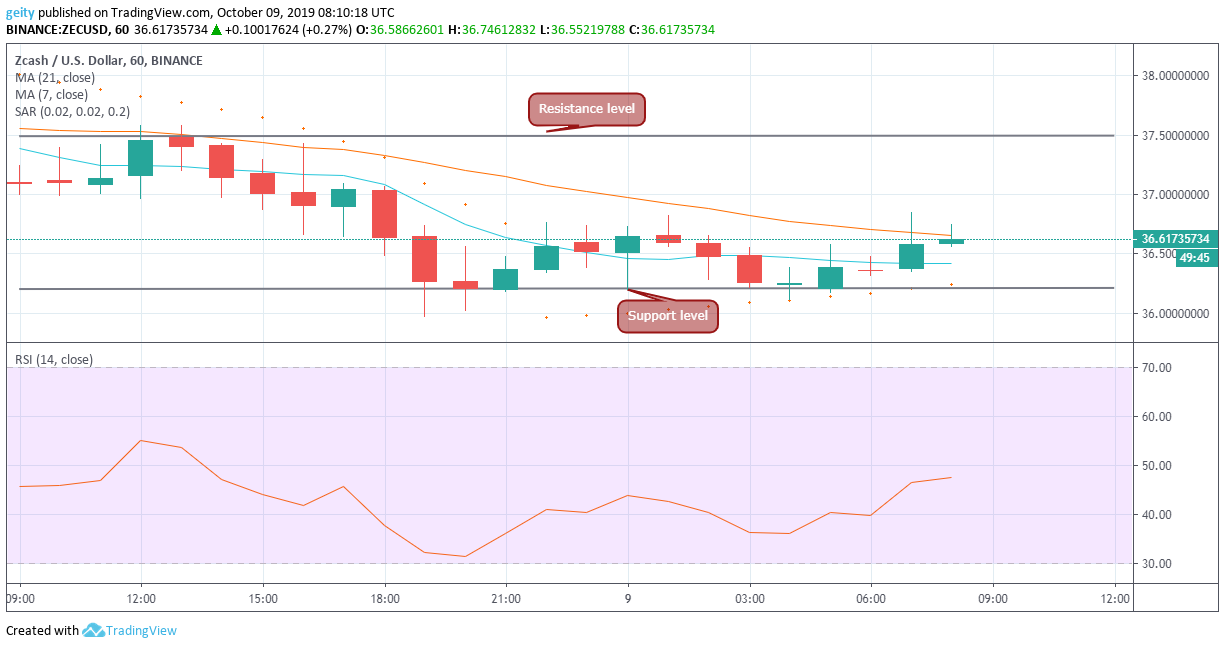 DASH/USD pair has also showcased a bearish scenario, with price failing to break above the significant resistance level found near $73.509. That was followed by a massive fall that dips the price to a low of $70.139.  The dip resulted to a steady flow below the healthy support level near $70.357.

DASH/USD pair is at the press time lacking dominance as reflected by the consolidation phase formed over the last 14hrs that signify strong incoming breakout in the near term. Looking at the moving averages, the long-term SMA has crossed over the short-term SMA that indicates a bearish trend.  The RSI indicator has dropped from trading near the overbought territory to now trading below average that signify a negative outlook. 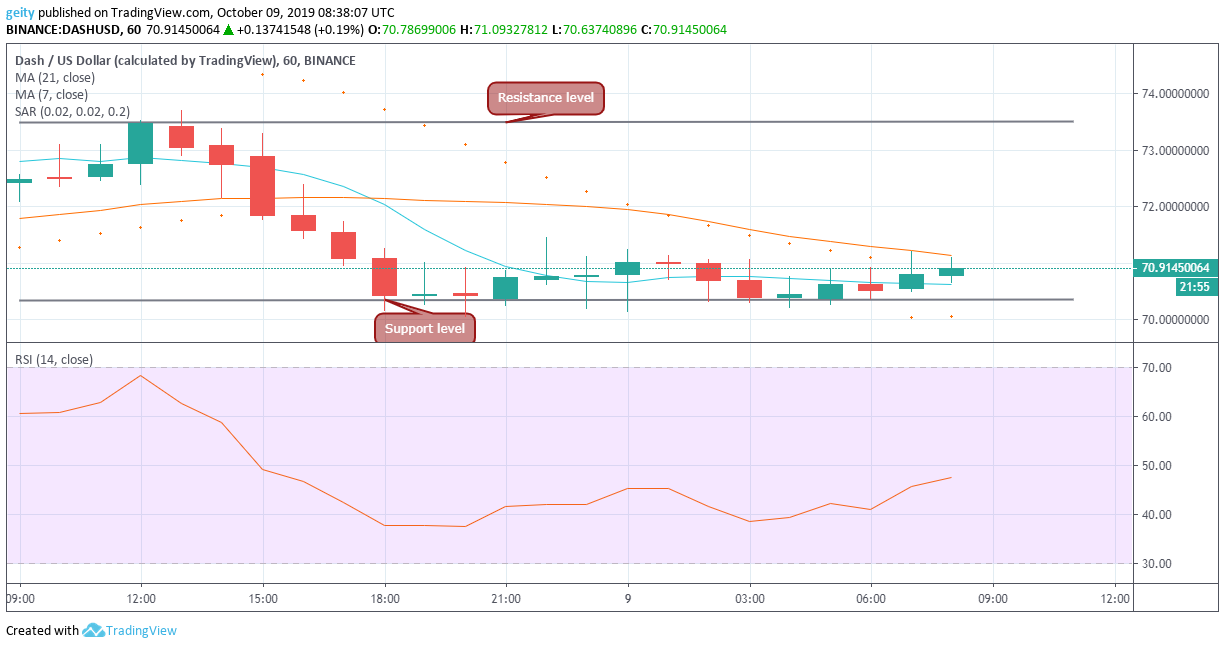 The parabolic SAR is suggesting investors to take a long position as it is seen below the price. Therefore a break below $70.357 may correlate losses near $60.500. On the upward direction, if the bulls pull up their game, a break above $70.000 may give rise to an upside rally near $75.000.

Disclaimer: This is not trading or investment advice. The above article is for entertainment and education purposes only. Please do your own research before purchasing or investing into any cryptocurrency or digital currency.