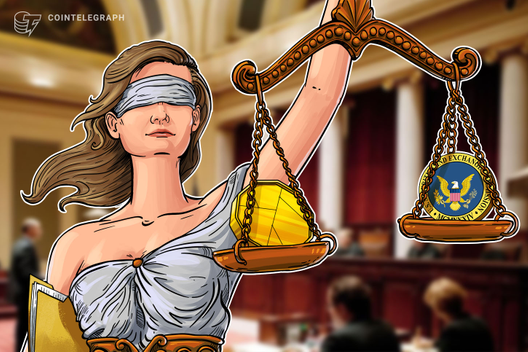 After filing a complaint against Veritaseum CEO Reginald Middleton and his two companies in August 2019, the SEC said that it is engaged in settlement talks with the defendants, fintech publication FinanceFeeds reports on Oct. 9.

According to the report, the regulator filed a motion to adjourn the initial conference at the New York Eastern District Court earlier in October. Following the motion, the court reportedly agreed to reschedule the conference for Nov. 14, 2019.

As previously reported, Middleton and his firms, Veritaseum, LLC and Veritaseum, are alleged to have raised $14.8 million by using material misrepresentations and omissions about the unregistered securities they offered — digital assets called Veritaseum (VERI) tokens, also known as “Veritas.” According to the report, the defendants conducted their Veritaseum initial coin offering (ICO) between April 25, 2017 and May 27, 2017 and also offered post-ICO sales.

The SEC’s complaint includes multiple accusations against the defendants, including misleading investors about the firm’s prior business venture, claimed outsized investor demand for VERI as well as the potential to generate millions of dollars of revenue.

However, no such products existed, the SEC reportedly claims, adding that the defendants engaged in manipulative trading in VERI Tokens to increase their price and to convince investors to buy more tokens.

Moreover, Middleton allegedly attempted to rebrand VERI in order to avoid the federal securities laws and registration requirements by trying to give them the status of “pre-paid fees,” “software” or even gift cards-based derivatives.

At press time, VERI is the 226th largest crypto asset with a market capitalization of $35 million, according to CoinMarketCap. After the SEC requested to freeze the defendants' related assets on Aug. 12, VERI saw a sharp drop from $16 per token to as low as $4.30 on Aug. 13. However, the token has seen notable growth since then. At press time, VERI is up 26% over the past 24 hours to trade at over $17, also seeing a whopping gain of nearly 45% over the past seven days.

« The IRS Just Issued Its First Cryptocurrency Tax Guidance in 5 Years
As Deepfake Videos Spread, Blockchain Can Be Used to Stop Them »