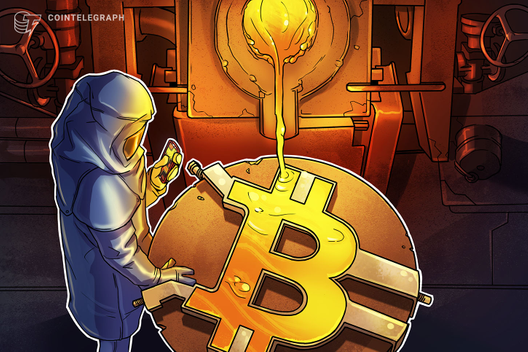 OTC trading platform B2C2 launches what it calls the first product for gold trading using Bitcoin for pricing and settlement.

Over-the-counter (OTC) trading platform B2C2 has created what it calls the first product for gold trading using Bitcoin (BTC) for pricing and settlement.

Speaking to industry news outlet The Block on Oct. 10, the company’s CEO Max Boonen stated that the move comes on the back of increasing demand from large-volume traders.

“Clients trade an ounce of gold priced in bitcoin, and the derivative is settled in bitcoin,” he explained, adding that one ounce (roughly $1,507) is the minimum possible trade quantity.

Boonen also pointed out the market’s desire for a Bitcoin-based gold derivative:

“The clients we are seeing demand from are those who have their own user base of traders and macro hedge funds.”

As Cointelegraph reported previously, gold has seen a renaissance this year as cryptocurrencies such as Bitcoin also showed increasing strength. A heated debate subsequently ensued, with gold proponent Peter Schiff claiming that the precious metal would ultimately outperform Bitcoin.

Meanwhile, B2C2’s product is conspicuous for using Bitcoin as the settlement asset. Last month, that trend continued with the launch of Bakkt’s physical Bitcoin futures, payouts for which will likewise occur exclusively in BTC.

« Bulls Push Bitcoin Price to a 2-Week High, is $9,700 Next?
Altcoins including TRON, Cardano, Chainlink on the run »