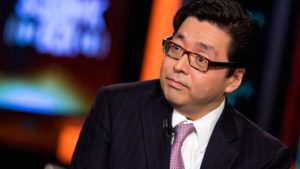 US stock index S&P 500 is moving towards new highs, and that can be a catalyst for another Bitcoin rally, says Thomas Lee, Head of Research at Fundstrat.

While the largest cryptocurrency has proven to have a low correlation with traditional markets, a stock market rally could add to the overall confidence of investors, and that might be a boost for Bitcoin as well.

Fundstrat’s Tom Lee tweeted that he expected the S&P 500 index to break to the upside, suggesting that the US stock market will update its record peak again.

We expect S&P 500 to break to the upside soon and this would enable #bitcoin to breakout as well.

– while many expect a recession, US has been stubbornly resistant.

Up until recently, most investors were worried about a potential recession amid the extended US-China trade conflict. However, it seems that the coordinated aggressive easing measures implemented by central banks, including by the Fed, will push equities. In the end, Bitcoin will also benefit from the policy.

Yesterday, the Fed chairman Jay Powell announced that the central bank was restarting the purchase of short-term Treasuries. However, he insisted we shouldn’t call this quantitative easing because the measure is “in no way” similar to the post-2008 crisis policy given its difference in scope.

Nevertheless, most analysts agree that the operation is nothing else but quantitative easing. The Fed’s asset purchases ensure banks have enough cash to prevent market turmoil.

“Powell was very clear to say it’s not QE, but you are adding balance sheet and reducing rates. It certainly smells like QE to me. You have to call it like it is.”

Despite being the best performing asset year-to-date, Bitcoin is currently the most undervalued asset. At least this is the opinion of Travis Kling, chief investment officer at Ikigai Asset Management. He argues that traditional markets are at all-time highs thanks to central bank’s QE measures. Now it’s the turn of Bitcoin to show its teeth.

…All made possible by QE.

A compelling argument can be made that BTC is the most undervalued asset in the world today.

Do you expect Bitcoin to break its record high soon? Don’t hesitate to share your thoughts in the comments section!