On Wednesday morning Bitcoin perked up and punched above the $8,300 resistance during the U.S. trading session.

The 5% rally was well-timed as Bitcoin price was weakening after successfully managing to break above $8,200 on Monday. At the time (Oct. 7) the digital asset had spent the last few sessions pressing against the upper trendline of the descending triangle on Monday. 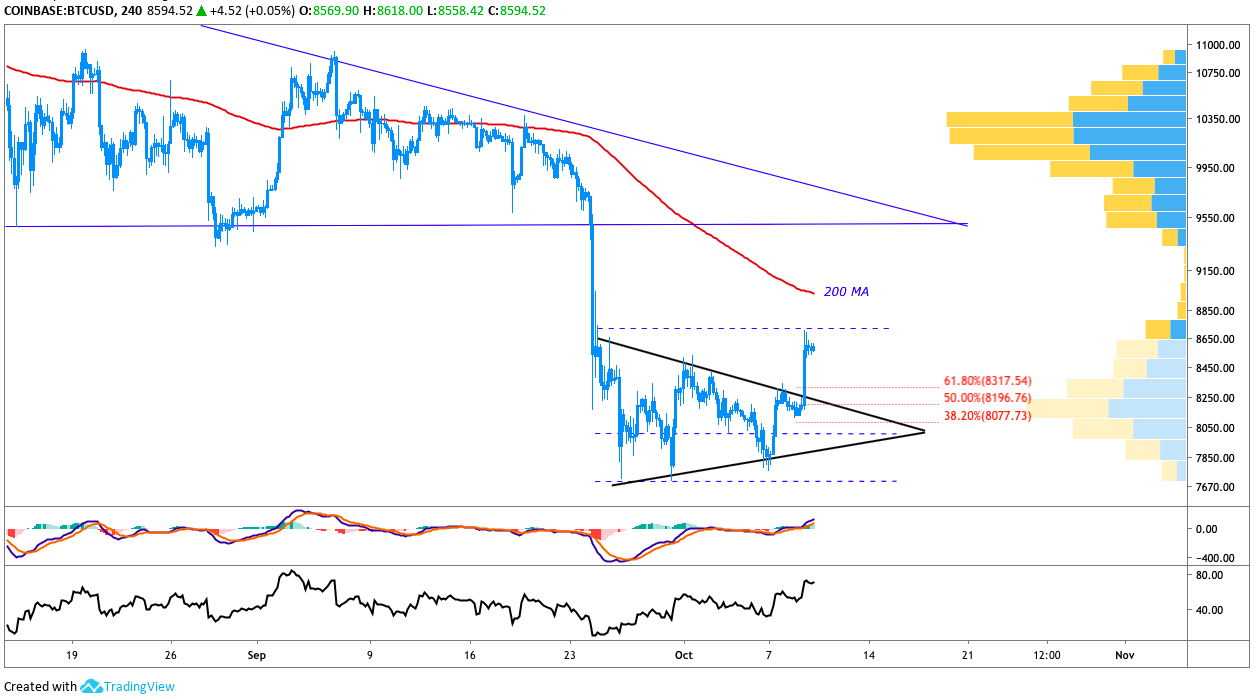 A closer look at the 4-hour chart shows a head and shoulder formation was in play since Sept. 30 and the surge from $8,250 saw the successful completion of this pattern.

Interestingly, Wednesday's upside move brought Bitcoin price right to the 200-day moving average (DMA) at $8,700. As mentioned in a previous analysis, the volume profile visible range (VPVR) showed selling pressure from $8,100 to $8,300 and relatively open air above this price point.

Bitcoin burst through this node on a high volume spike and the move to $8,730 was followed by a bit of profit-taking. On Wednesday and Thursday, bulls will be looking for a close above $8,700 and $8,750 would be even more ideas.

Given that the VPVR shows limited selling pressure above the 200-DMA, a run to $9,400 is possible but $9,000 is expected to provide some push back. The move to $8,750 is also slightly above the 20-MA of the Bollinger Band indicator and volume permitting, the digital asset could be on the path to set a higher high by overcoming the previous local high at $9,750. 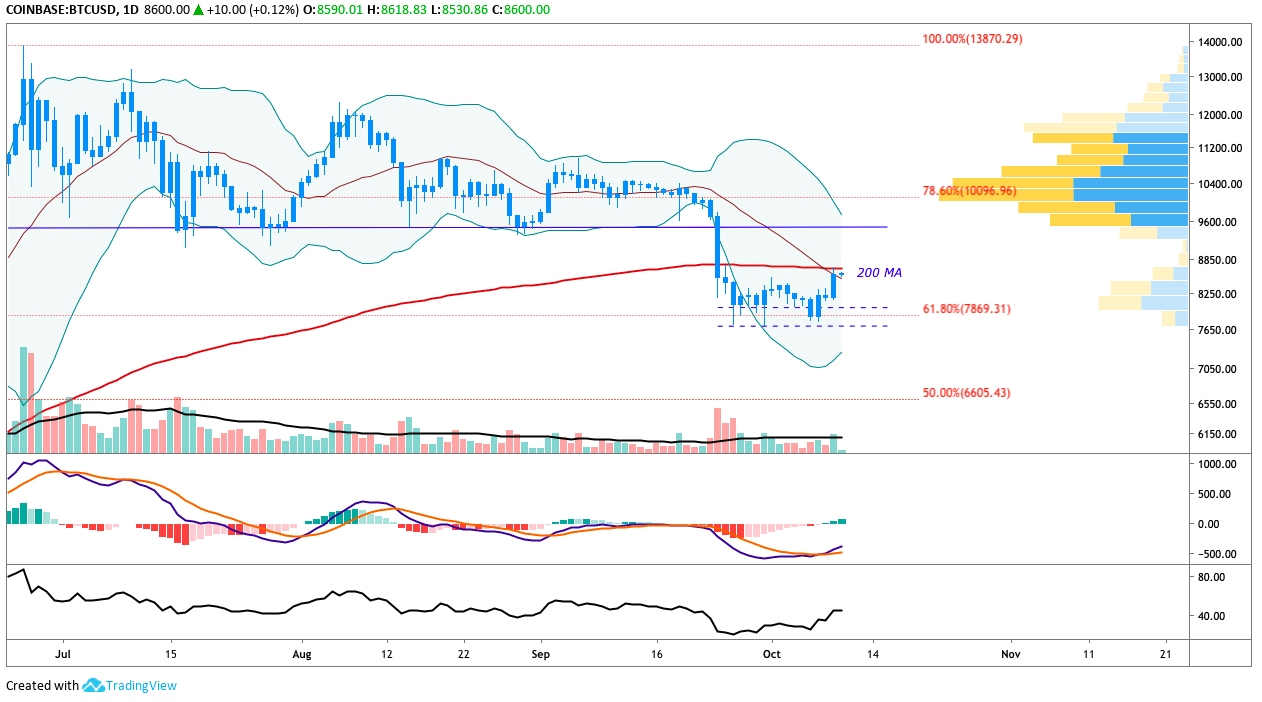 Currently, the 200-DMA appears to be an overhead resistance and traders will be watching for a daily close above this point. Further proof of resistance at this point can be observed by the neutral Doji candlestick which is currently on the daily timeframe.

What do the oscillators say?

The signal line on the Moving Average Convergence Divergence (MACD) crossed above the MACD and the histogram flipped green and is well above 0. The daily Relative Strength Index (RSI) also sharply reversed from oversold territory and at the time of writing currently is climbing above 45.

Since August 19, Bitcoin price advances have been capped at 52 and 55 on the RSI so while this is typically bullish territory, traders might keep an eye on the region to see if purchasing volume and candlestick patterns suggest that Bitcoin is becoming over-extended.

What is even more notable is that the weekly RSI reversed from 44 and now working its way back up to bullish territory (50).

Similar activity can also be observed taking place within the weekly Stochastic RSI. One should also note that the daily Stoch RSI is at 98.87, a point that marked a price reversal on Aug. 5 and Sept. 5.

Ultimately, a close above $8,750 was desirable and while Wednesday’s close at $8,600 is below this point, Bitcoin price is still well-positioned for additional growth. One hopes to see Bitcoin surpass $9,000 first then $9,750 over the coming days.

Traders who opened long positions at the $7,766 double bottom might set their targets at $9,700, a point which is also close to the upper Bollinger Band arm. 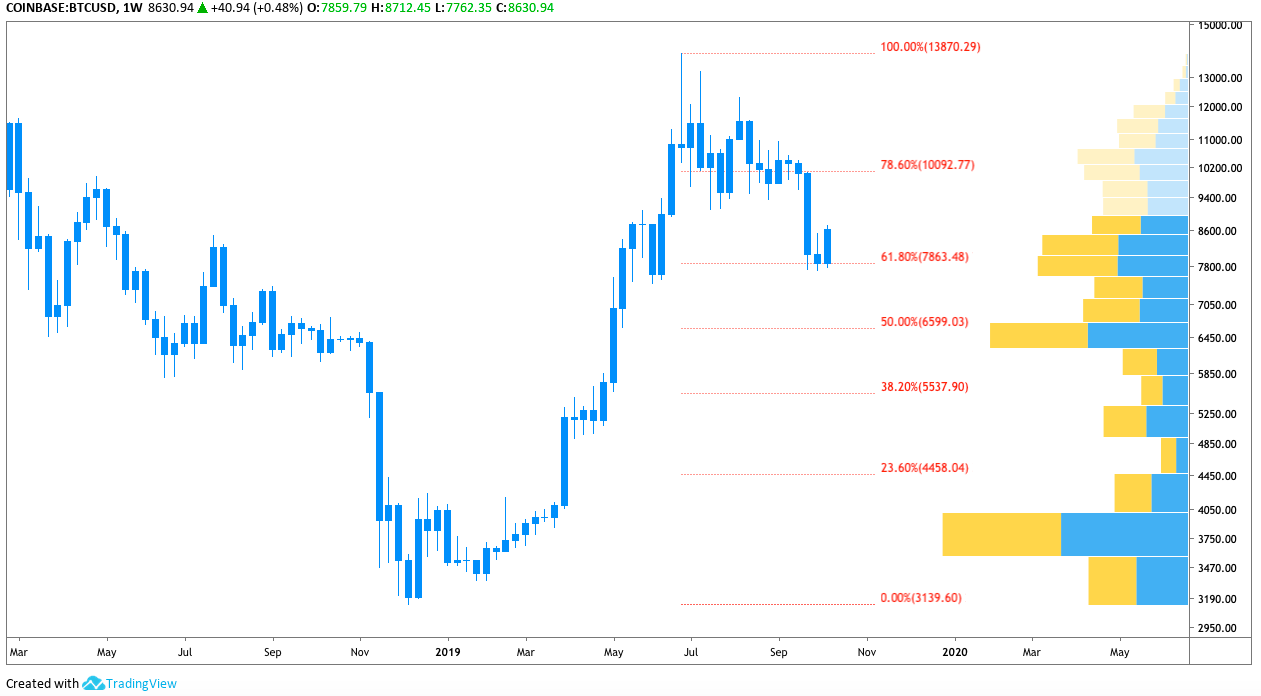 Bitcoin is working hard to overcome its longer-term bearish bias but as shown by the weekly chart, the digital asset needs to overcome the $10k mark, a move which according to the VPVR, could be marked by stiff resistance.

Glassnode’s Bitcoin SOPR, a measure which according to creator Renato Shirakashi is a relatively simple indicator calculated from spent outputs. The SOPR divides realized value (USD) by the USD value of the output. Simply put, Shirakashi says that:

“Price sold/price paid. When SOPR > 1, it means that the owners of the spent outputs are in profit at the time of the transaction; otherwise, they are at a loss.” 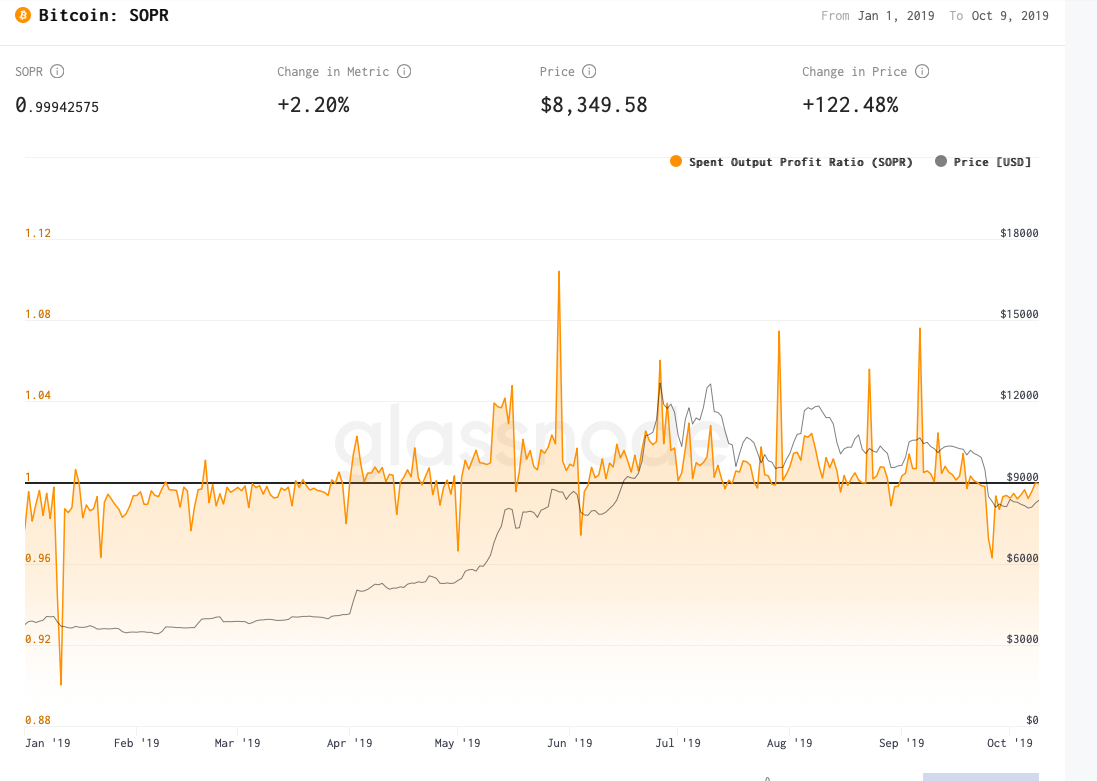 As shown by the Bitcoin SOPR chart above, the Spend Output Profit Ratio and Bitcoin price are both on making their way toward 1. According to the chart, traders that bought from $7,766 to $8,000 have secured a fantastic swing entry at the least and should be happily in profit from today’s strong upside move.

A swing position, rather than a leveraged or spot long position was mentioned as there is still the possibility of Bitcoin failing to rally above the 200-DMA or experiencing a strong rejection at $9,000 and $10,000.

Over the past two weeks, $7,800 has been tested 4 times and it has proven to a reliable bounce point just as $9,400 was when Bitcoin was consolidating within the descending wedge a few weeks back. Similar to this time, Bitcoin price could eventually pierce $7,800 and drop to the 2-year moving average at $7,680.

Crypto and on-chain analyst Philip Swift suggests that this still could occur and the analyst posted the following chart in a tweet earlier this week: 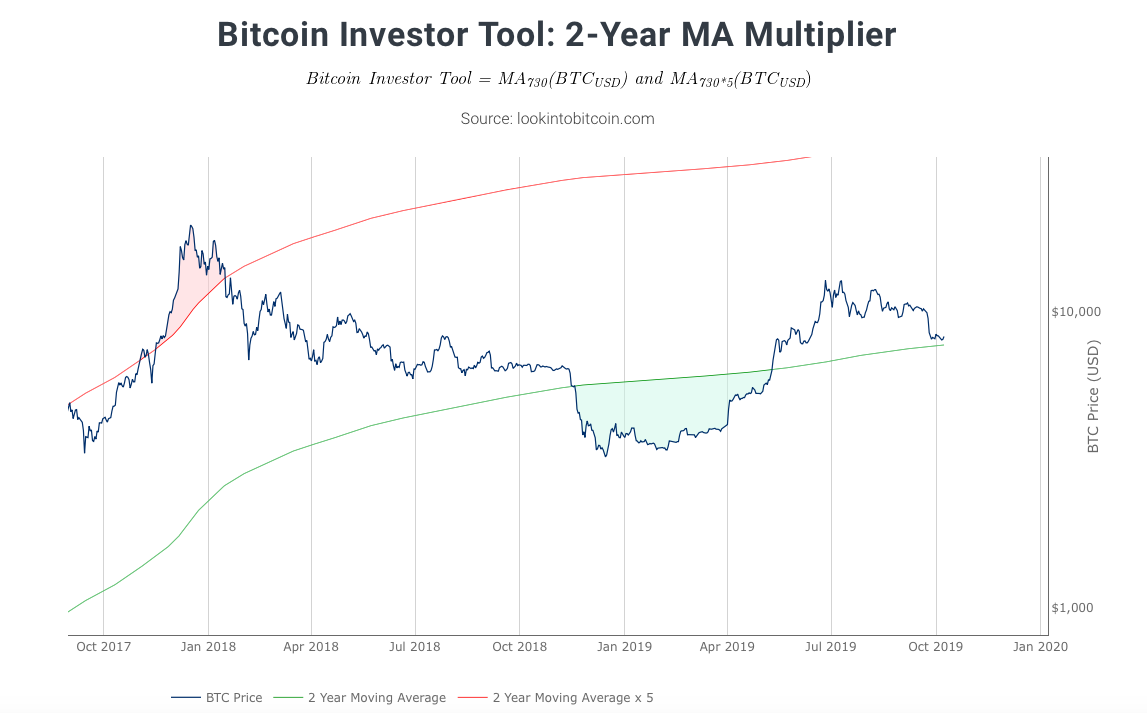 “Spoke weeks ago when $BTC was higher about the price coming back to retest the 2yr MA, as it did in prior market cycles.

Some thought this was silly and we would go straight up, but we have now pulled back to within touching distance of it.”