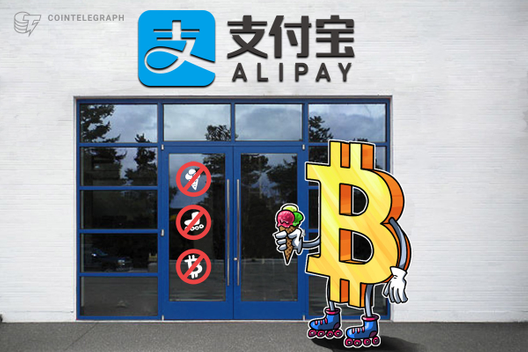 Alipay, a digital payment arm of Chinese e-commerce giant Alibaba, declares that it will be banning any transactions related to Bitcoin or other cryptocurrencies.

Alipay, a digital payment arm of Chinese e-commerce giant Alibaba, declared that it will be banning any transactions related to Bitcoin (BTC) or other cryptocurrencies.

On Oct. 10, Alipay has reiterated its anti-crypto stance in a Twitter thread, elaborating that the company is closely monitoring over-the-counter transactions to identify irregular behavior and ensure compliance with relevant regulations. Alipay wrote:

“If any transactions are identified as being related to bitcoin or other virtual currencies, @Alipay immediately stops the relevant payment services.”

This move comes amid various reports that Alipay is being used for Bitcoin transactions, the company explained.

Binance CEO Changpeng Zhao, also known as CZ, clarified that the exchange is not working directly with WeChat or Alipay, and users are still able to use them for peer-to-peer transactions.

This announcement followed the implementation of Binance’s peer-to-peer trading for Bitcoin, Ether (ETH) and Tether (USDT) against the Chinese yuan (CNY) earlier, as reported by Cointelegraph.

Originally founded in China in 2017, Binance made its first strategic investment in Beijing-based crypto and blockchain publication Mars Finance in mid-September 2019. At the time, crypto community was anticipating the People’s Bank of China to develop its own central bank digital currency (CBDC) as Circle CEO stated that no one in the world was closer to launching CBDCs than China.

However, in late September, the bank shattered the expectations, claiming that it has no specific launch date for its CBDC, denying that the country is ready to roll out its new financial asset.